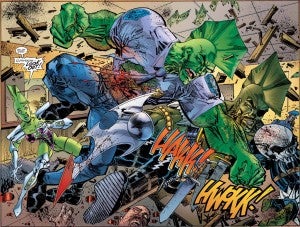 Back in mid-April, as the controversy over Chris Roberson and David Brothers' ardent and divisive comments on Before Watchmen and The Avengers movie were generating a ton of conversation in the comics Internet, Image Comics co-founder Erik Larsen proposed something rather interesting on his Facebook page:

"I actually think that the industry would be a lot healthier and the books a lot better if Marvel and DC didn't own characters and characters' stories ended when creators moved on," Larsen wrote, and went on to cite a number of examples where Marvel series flourished under Stan Lee and Jack Kirby and have never really lived up to that lofty standard since. "The only place where this falls apart is DC because those early issues of Batman are nowhere near as cool as what came after," he conceded, and then went on to talk about the issue with fans for quite a while.

Larsen, of course, has been writing and drawing Savage Dragon, a character he created in grade school, since the founding of Image Comics twenty years ago. He's the only one of the Image co-founders to work month-in and month-out on his original title for the duration of the company's lifespan and has said in previous interviews that he can't see himself ever walking away from the book. Beginning in April, though, he took on first the art and then the writing and art chores on Supreme, a work-for-hire project tied to the Extreme Comics relaunch. Extreme is, of course, the Rob Liefeld-owned imprint of Image Comics featuring such titles as Prophet and Youngblood. It's the first time in a while--but not ever, and not even since the beginning of Image--that Larsen has taken on an ongoing series based on other people's characters.

Larsen's idea is an intriguing concept, to be sure, and not something that can really be tested. After all, it's not as though DC and Marvel are going to suddenly change their entire business model and move toward a philosophy that embraces creator-owned work with a short shelf life. They've each got imprints for that, and those imprints do just great in the bookstore market but never really set the direct market on fire.

What got me thinking about it again is this persistent discussion the comics industry is having right now about the idea of DC reinventing a character as a homosexual for the New 52. I thought about the last time DC did this--to Obsidian--and that not all of the fans, or even all of the creators who had worked on the character, were happy to see it happen. These people weren't inherently homophobes; they were simply frustrated to see a character depicted in a way they considered to be inconsistent with his previous portrayal. Certainly that (and, by extension, this next one upcoming) could have been avoided if characters like Obsidian weren't just thrown back into the "freebies" pile at DC after their books are canceled or a writer leaves and the next guy doesn't want him on the the team.

It feeds into this attitude that I've seen a lot that there's no need to reinvent an existing character, and that if DC wants gay characters so badly maybe they should just create one and properly promote the character to give him or her the best opportunity to reach their audience.

There's even an argument--at DC, no less--to be made that this could keep things fresh and new. Most of the best reinterpretations of DC's titles come from things like James Robinson's Starman and China Mieville's Dial H: Rather than a continutation of the character's history in the vein of the traditional superhero soap opera, they're basically remakes. Starman is interesting because, essentially in deference to Robinson's work with the character, they've taken him off the board and future creators have been unable to use Jack Knight in their stories.

Of course, that was true about Watchmen for a long while too.

On the TV side, we're dealing with this question in a very specific way right now in seeing how Dan Harmon's firing from Community will play out. As the creator of the show and the showrunner, Harmon brings something to the table that nobody else can match--and there are a lot of fans (and some of the show's other writers) that think there's simply no Community without him. If next season crashes and burns, it'll be a strong argument in favor of the notion that the show should just have ended when Harmon was ousted. If it somehow manages to thrive, it will send a message, loud and clear, that even the most hands-on showrunners aren't necessarily as important as they think they are to the financial success of the show. Either way, retaining any artistic continuity without Harmon, who has been identified as the mad genius behind the show, seems unlikely.

Ultimately, it's hard to agree with Larsen's statement without a lot of caveats. The assembly-line nature of mainstream superhero comics, combined with the changing sensibilities of the day, often make it hard to cite a thirty- or fifty-year-old story as the "best ever" featuring a character. By the time Dennis O'Neil and Neal Adams took on Green Lantern/Green Arrow, the material by John Broome and Gil Kane already seemed quaint and dated. With the benefit of hindsight, it's now easy to be dismissive of O'Neil and Adams' groudbreaking work as being too didactic and out of character. In five or ten years, there will be a cheeky and derisive tone by the next generation when talking about Geoff Johns and his rainbow of different Lantern Corps, and there will be a new "best" writer aboard the franchise, and if they weren't continuing storylines some of that material would never come to be.

There are also guys who, in spite of being supremely talented visual storytellers, have always been better at maintaining the intellectual properties of others than at developing their own...and it's hard to say those people don't have a place in comics.

All of that said, do we really feel like we ever need to see somebody else's take on Savage Dragon or The Invisibles? Surely not, and anyone who tried would likely be churning out little more than commercially-available fan fiction. Which is, admittedly, not an entirely inaccurate description of what sometimes happens at the Big Two.

And, of course, who's to say that even if we had been deprived of O'Neil and Adams' Green Lantern/Green Arrow, or Batman, that they wouldn't have come up with a new idea all their own and made history that way?

What if Creator Ownership Was Across-the-Board?