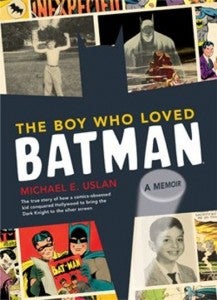 has recently posted many thoughts that Michael Uslan, who has been an executive producer on all the modern-day Batman movies, shared about the Dark Knight Rises as part of Film-Com. In addition to being an executive producer, Uslan is also an author who has written a great book about Batman called "The Boy Who Loved Batman." In the book, Uslan tells about his childhood interest in Batman and his long and sometimes difficult journey to bring the Batman to the silver screen. During his talk at the Great Escape comic book store as part of Film-Com, Uslan shared many entertaining anecdotes, which should give you a feel for just how enjoyable his book is. To start off his conversation, Michael Uslan answered the obvious question of "Why Batman?" Uslan explained part of the appeal of Batman is that he's a superhero with no super powers. He also added that Batman has the greatest supervillains in history.

Uslan also relayed a story about one of his fellow comic book collectors, which involves the burning of $700K in comic books. It's a horror story for comic book fans everywhere.

When $700K In Comic Books Burned