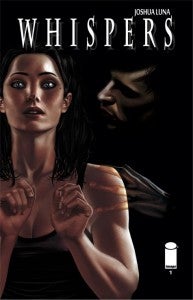 has announced a new six issue mini-series called Whispers. The series will be the solo debut by Joshua Luna of the Luna Brothers. Like many of the past comic books that Joshua Luna has created with his brother, the Whispers will tell orginal stories with supernatural elements mixed with human drama.

Joshua Luna will be serving as both writer and artist on the Whispers. The series will raise questions of free will, while exploring obsessions, addictions and urges. The main character in the story is a mentally troubled man who gains the ability to leave behind his physical body and exist in a ghost-like form. With this power, he’s able to manipulate people in strange and disturbing ways.

"A lot of people who are familiar with my writing may not know this, but I started drawing long before I attempted to write," said Joshua Luna. "I’ve been dying to tackle the art on a comic book series for a long time, but I’ve been waiting for the right time and the right story."