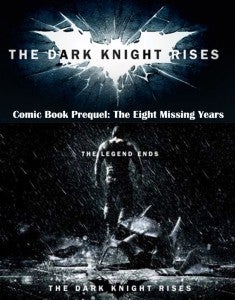 Several months ago DC Comics showed their commitment to bringing in new readers to comic books by relaunching their entire universe. In the summer of 2012, Warner Bros. will be releasing what looks to be the movie of the year based on a DC Comics character. Now, for the obvious question, why has DC Comics not announced a Dark Knight Rises prequel comic book?

Sure, the Batman movies are outside the regular continuity of the Batman comic books, but similar situations have never stopped other publishers from releasing comics based on their movies. In fact, Marvel Comics has already announced a four issue Avengers Movie prelude comic book series, which will start arriving in comic book stores in March.

Just look at how The Dark Knight Rises trailer has exploded on social media sites with everyone wanting to get a look. Imagine a Dark Knight Rises prequel comic book that doesn’t give away the plot of the movie, but reveals about as much new information as a new trailer would. There would be tons of media that would buy the comic and report on it, just so they could give the inside scoop on what may or may not be in The Dark Knight Rises movie.