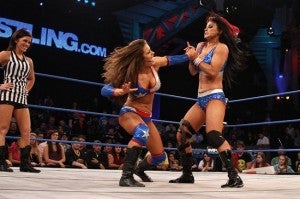 In a new YouTube video posted by TNA Knockout Tara, the star alleges that her scheduled appearance at this weekend's Wizard World Chicago Comic Con was cancelled after World Wrestling Entertainment told organizers they wouldn't show up if TNA was there.

Some of WWE's biggest stars appeared over the course of the weekend, including John Cena, CM Punk and Booker T.

"I was supposed to be there on Saturday and the only way WWE would show up is if Impact Wrestling was not going to show up. So I got the last minute phone call and I got nixed," said Tara in the video.

Garrett Gray, the winner of Knockout's Geek Fit Challenge and also featured in the video, tries to put the move into context, asking, "Are you telling me that the WWE says that Impact Wrestling is not competition, but yet they are banning them from Wizard World?"

Tara, formerly known as Victoria, was a two-time women's champion during her stint with WWE. She moved to TNA (Total Nonstop Action) in 2009. A number of other former WWE stars appeared as Wizard World Chicago without incident this weekend.

Wizard World Chicago: Did WWE Get TNA Banned From the Show?