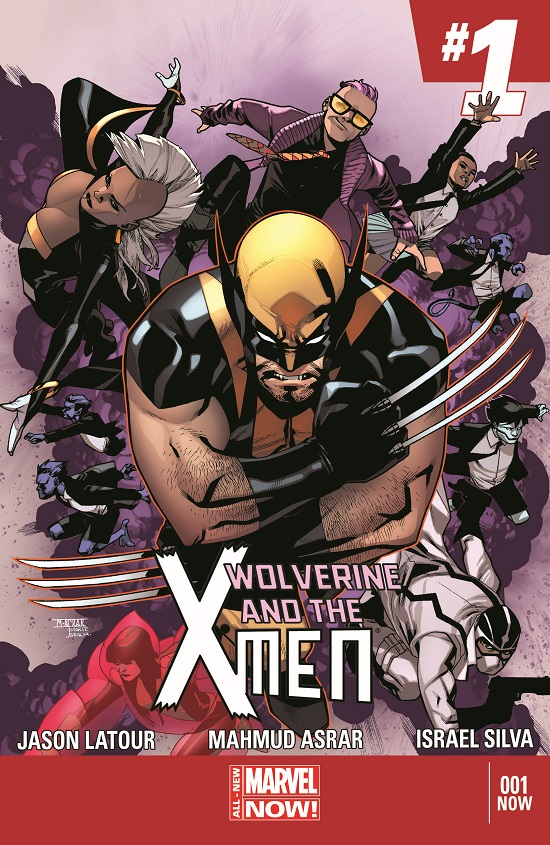 It was just last week that we said goodbye to Jason Aaron's volume of Wolverine and the X-Men. Now Jason Latour, Mahmud Asrar and Israel Silva have picked up the torch and are telling stories at the Jean Grey School for Higher Learning, and there first outing is a decent, if somewhat toned down, affair. The issue picks up following graduation day at the Jean Grey School. Many students have moved on, and others have moved into new positions, such as Quentin Quire, who is now a teaching assistant. Latour uses the shifting of places during the school's summer semester as a way of putting focus on the character he plans to make into his main cast, namely: Quentin Quire, Idie, Storm, Armor, Evan and Fantomex. Latour seems to be trying to tie together plot threads foreshadowed in the last issue of Wolverine and the X-Men, the Battle of the Atom crossover, and even way back in Rick Remender's Uncanny X-Force. He seems to want to discuss ideas about predestination and self-determination, and sets that theme up early with a flash-forward to a battle between a Phoenix-empowered Quentin Quire and Evan, who seems to have gone full-on Apocalypse. It's a fitting thematic backdrop for a book about young mutants, and it's continued when the focus is shifted to present day Quentin Quire, who is having trouble growing into his new role as a T.A. Idie is trying to help him find his feet, and their scene together is one of the highlights of the issue. Latour sells the playfulness of their conversation early on and then, when things turn more serious, Asrar's close framing really sells the intimacy between the two without strangely over sexualizing a couple of teenagers. There are a couple of confusing moments though. In the flashforward scene, it's a little hard to tell Evan-pocalypse's coat from his legs. Then, when Logan is battling Kragg it's hard to tell who is BAMFing where. But, on the whole, Asrar's art is energetic and attractive, made lush by Silva's deep colors. When Fantomex finally appears, the scene is framed perfectly and is reminiscent of Chris Bachalo's work on the "Assault on Weapon Plus" arc that defined so much of Fantomex and Wolverine's relationship, and so is a fitting look. On the whole though, while this story is solid, it feels less bold than the previous volume of Wolverine in the X-Men. Aaron's first issue, with Chris Bachalo on art, was huge shift in how X-Men comics read and looked at the time. Latour and Asrar's first issue feel more like they're trying to bring the series back in line. It's unfair to criticize this issue for that, but it's hard not to see this series as being in the shadow of the previous one. It's solid, but its just not as unique as we've come to expect from the book. If you were never a fan of the wacky tone that Aaron applied to his X-Men tales, then this will be a welcome change. If you were a fan, you may still find yourself mourning the loss.

Wolverine and the X-Men #1 Review

Regal to Screen All 10 Best Picture Nominees, Including Netflix Movies

Dragon Ball Proves Yelling Is One of Acting's Toughest Jobs

Attack on Titan Creator Opens Up About Eren's "Worst Parts"