Brian Wood and Kristian Donaldson, the fan-favorite creators behind titles like DMZ, Demo and Supermarket have come together to create The Massive, a new, ongoing series from Dark Horse that follows life for a group of survivors of a global environmental disaster, referred to as "The Crash," which wiped out most life and all civilization on the planet.  It's an ambitious and beautiful new title that dips its toes into the frigid, glacier-filled waters of environmental science as an alternative to more traditional world-ending horror scenarios like zombies or war. Wood joined us to discuss the series (the first issue hits the stands on Wednesday), his long-term plan for the characters, and why "post-apocalyptic" is a phrase he never needs to hear again. Following the interview, check out a five-page preview of the series from Dark Horse. 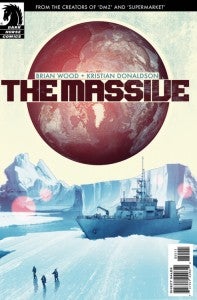 So--going into the first issue of The Massive, do you know what the answer is that your characters are looking for? Do you know what caused the Crash? You mean, do I know personally? I have the whole series figured out. There is a very deliberate end to this story and I'm aiming straight for that target. I'm keeping the length of the series relatively short - 30 issues - so we won't meander along the way. It reminds me, a bit, of something like Y: The Last Man. In that vein, do you have an arc planned out so that this ongoing series is really "ongoing for forty issues," or is this a true ongoing in that you don't necessarily go into it with an end in sight? From what I heard at the time, Brian Vaughn has that series planned out to the letter and with great precision he executed it. I'm not doing that... the second act of The Massive is less-defined than the first and third, and will be episodic in nature, but I'll hit that target. 72 issues of DMZ was too much for me, I don't think I can do something like that again. I'd rather do two 30-ish series than one 72-ish. The bit with the tuna, as you're recounting the history of the disasters in The Massive #1, it kind of reminds me of all those mass bird deaths and all that last year. Did that play into the book at all in terms of being something in the air (no pun intended) while you were writing? Nah, I had just finished reading the book Four Fish, which is great. But the reality of depleted and otherwise compromised fish stocks is not a new thing to me. 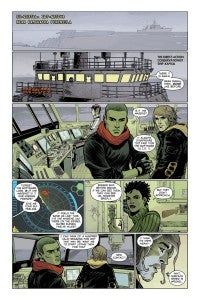 How much research did you have to do in order to feel confident that you were telling a believable story that didn't trivialize the issues you were discussing? In the past, too much research. This time around I'm not going down that rabbit hole and am consciously doing less research and giving myself a break, and a pass to not have to be so precise all the time. Especially when it comes to ocean and weather science which is something people get doctorates in. So the science will be fuzzy at times, but the focus of the story is not on those details specifically, but more about how the characters react to them. At this stage, working on creator-owned books for smaller publishers most of the time, do you feel like you have to worry more or less from political blowback from a project like this, with some right-wingers insisting they'll never buy something like The Massive? I got zero blowback from DMZ, so I stopped worrying about it. DMZ has tremendous reach - hundreds of thousands of copies in nine languages. If I was going to get blowback it would be from that series. The Massive is far less political. There's always a segment of fandom who assumes all I'm doing is ranting and soapboxing, but frankly, I'll never change that impression so why worry? I wouldn't call that blowback, either. 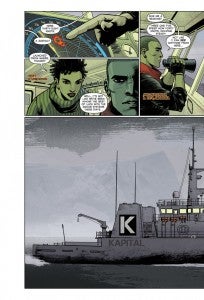 Mary seems to have her own philosophy and kind of march to hte beat of whatever drum occurs to her to march to; is that something that will be a problem for her in interacting with the rest of the characters, long-term?

Mary is a deeply complex character, that's all I'll say right now. Her comments on "the luxury of a moral code" really sound to me like something you'd usually hear from a book like The Walking Dead. What do you think are the similarities and differences between your end-of-the-world disaster and the zombie/supervillain variety that comic fans are more used to seeing? On some level its all survivalist fiction. I don't read The Walking Dead so I can't comment directly. But technically, The Massive fits the description of a post-apocalyptic story, even if I'm handling it in a very different way. So I'm sure the comparisons are sound. But I hear the word "post-apocalypse" and cringe a bit. I think it means everything and at the same time nothing at all, and we feel like we've seen it all before. I use the word "Crash" in place of it, which feels more grounded and topical. Why "The Ninth Wave"? It sounds a bit like a cult or a terrorist organization. I keep thinking of Mandarin's Ten Rings. 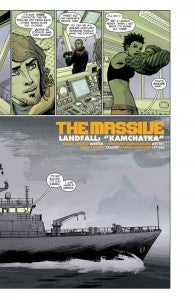 It took me months to pick a name for their organization. In the end I just wanted something that sounded cool, looked cool on the page, and felt plausible. I scoured the web for inspiration and ended up finding something in Norse myth, about how there are nine different kinds of waves. Are the end notes going to be in every edition or only for print, like what Matt Kindt is doing with Mind MGMT? The backmatter is limited to the single print issues only, sort of like what I did with Demo, way back. It's a perk for that format - typically the single print issue is the most difficult to find and most expensive format to read a comic in. Is it kind of cool to be at the forefront of what Dark Horse is doing right now? It seems like every month all summer long they've got at least one new book coming out that makes me soil myself. Dark Horse was very kind to me and gave me a safe place to land when the s--t hit the fan over at DC. I'm very happy and hope I can repay them with a string of successful books. So far Conan is going great and the orders on The Massive are very high, so things are good. [gallery link="file" order="DESC" columns="2"]