Disney's slate of upcoming movies has rapidly expanded in the last few years, thanks to acquisitions like Marvel and Star Wars; new animated features from both the Disney Animation and Pixar divisions; and even a new vertical of old animated films re-adapted into modern live-action blockbusters (Jungle Book, Maleficent, Cinderella, Beauty and the Beast).

With such a big slate of films to manage, it's no surprise that Disney has needed to do a big of rearranging; and today, we got the new slate of release dates for some of the studio's most-anticipated upcoming projects.

Here are All of the New Disney Movie Release Dates we learned today.

The installment of the Star Wars Episodes hits theaters this holiday season, with a dark and ominous storyline that could include major shakeups for the Star Wars Universe.

A Wrinkle in Time

Selma director Ava DuVernay's adaptation of this classic sci-fi/fantasy novel will likely touch on timely themes of good vs evil, conformity vs individuality, and authoritarianism vs democracy. We're also hoping it'll be a trippy visual feast, as well.

More: A Wrinkle in Time News

This comedy/fantasy for the family will revolve around comedian Adam Devine (Workaholics, Pitch Perfect), who returns to the Magic Camp he attended as a kid, to get his career as magician going again. The cast (Gillian Jacobs, Jeffrey Tambor, Aldis Hodge, and more...) looks talented enough to make this a really fun experience. The only question is: how much real magic will we see in this camp? 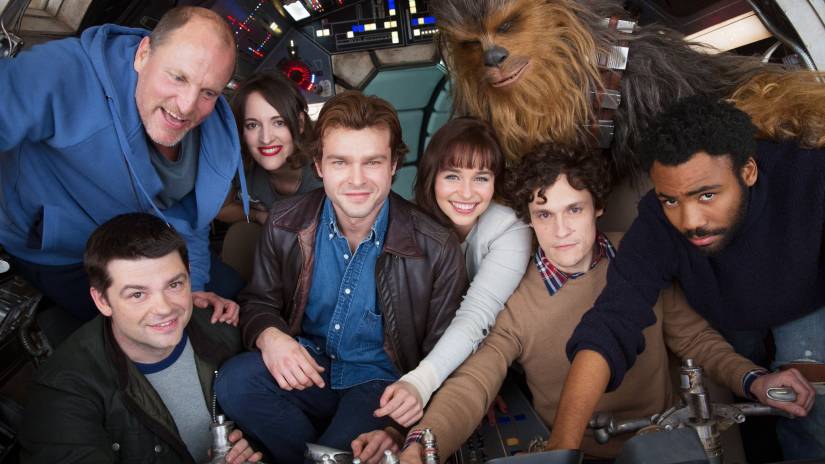 The untitled Star Wars standalone about Han Solo already has an awesome cast, including Alden Ehrenreich in the Han Solo role; Donald Glover playing Lando Calrissian; Woody Harrelson as Han's nefarious mentor, Beckett, and actors like Michael K. Williams, Thandie Newton and Game of Thrones' Emilia Clarke in supporting roles. With LEGO Movie and 21 Jump Street directors Phil Lord and Chris Miller at the helm, we expect great things from this one.

Wreck-It-Ralph made '80s and '90s kids all over the world happy with its classic Disney hero's journey, superimposed over a video game world that was chock-full of great Easter eggs and references. With Wreck-It-Ralph 2, it seems that the gaming theme will be pushed even further into the realm of modern day, Web-based gaming. Results should be hilarious.

Jurassic World director Colin Trevorrow will be attempting to close out this Star Wars sequel trilogy with an Episode IX. For the first time ever, Star Wars fans won't have to wait 2 -3 years for the next chapter of the saga. A year-and-a-half wait will put Episode IX right smack dab in the summer movie season.

Director Jon Favreau made movie magic happen when he did a live-action remake of The Jungle Book - so naturally Disney brought him back to make lightning strike, not twice, but rather three times. Favreau will deliver The Lion King first, before working on The Jungle Book sequel.

Frozen was a milestone smash hit for Disney, bringing the first princess love story that showcased the love between two sisters, rather than a traditional "prince saves the day again." After achieving such unprecedented success, there's monumental pressure on Frozen 2 to surpass the original. It's hard to imagine the sequel significantly raising the bar, but if anyone was to meet such a challenge, it would be Disney.

Even though fans still haven't recovered from the travesties of Indiana Jones and the Kingdom of the Crystal Skull, we're getting another installment - and this time we're hoping that director Steven Spielberg and actor Harrison Ford can deliver something more in step with franchise expectations.

This modern retelling of Jack and the Beanstalk sees a Spanish adventure-seeker, who forms a friendship with a lost little girl - who happens to be from a race of giants who live in the clouds. Sounds like a classic Disney buddy-comedy/adventure.

Here are All of the New Disney Movie Release Dates