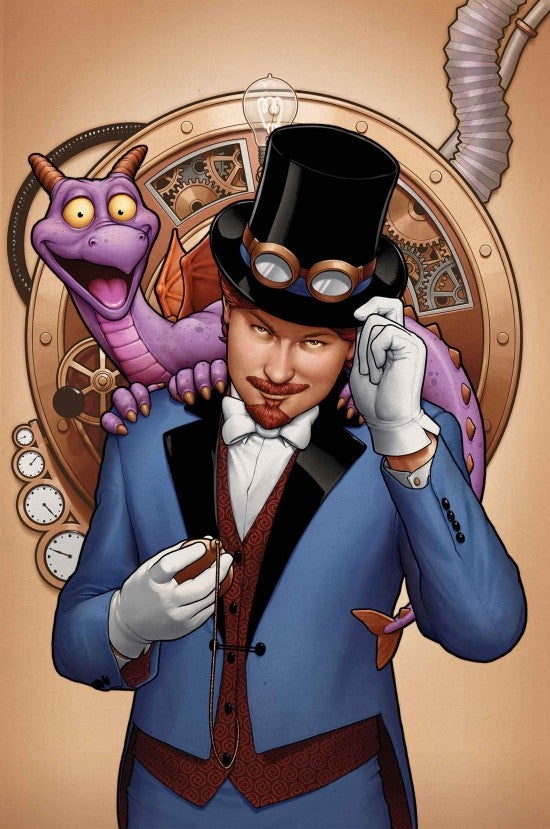 This morning, Marvel Comics and Walt Disney Imagineering confirmed earlier rumors that Jim Zub and Filipe Andrade will unite this summer for a new comic book series based on Figment and Dreamfinder, the mascots/emcees of Epcot Center's Journey Into Imagination attraction. The five-issue series weaves an all-new steampunk fantasy adventure that reveals the never-before-told origin of the inventor known as Dreamfinder and his trusty dragon companion! "Expanding the story of Figment has been intimidating, but I'm genuinely enjoying it," said Zub. "I want to do right by Disney fans and new readers alike, creating an entertaining story and that comes from working with engaging characters. Digging a bit deeper into Figment and Dreamfinder has been a fun challenge. In so many ways this story really is a 'Journey Into Imagination,' in both word and deed." You can see the cover above and solicitation text below. Figment #1 hits the stands in June. FIGMENT #1 (OF 5) Written by Jim Zub Penciled by Filipe Andrade Cover by John Tyler Christopher Elements based on Figment © Disney 32 PGS./All Ages …$3.99

Dragon Ball Super: Why The Heeters Are Some of the Most Dangerous Villains