The Power Rangers 2017 movie reboot continues to generate a big buzz, as fans continue to get first looks at various aspects of the film, such as the designs for the Rangers, their Zords, and classic villain Rita Repulsa (Elizabeth Banks).

The latest wave of Power Rangers Internet chatter has been set off by the reveal of a very different version of villainous henchman Goldar that we will see in the film. Well, as a byproduct of that fan reaction to the new Goldar, we may have confirmation of a Major Bombshell for the Power Rangers movie!

...That's right Power Rangers fans: We have our best confirmation yet that classic Green Ranger Jason David Frank will appear in the Power Rangers movie reboot! 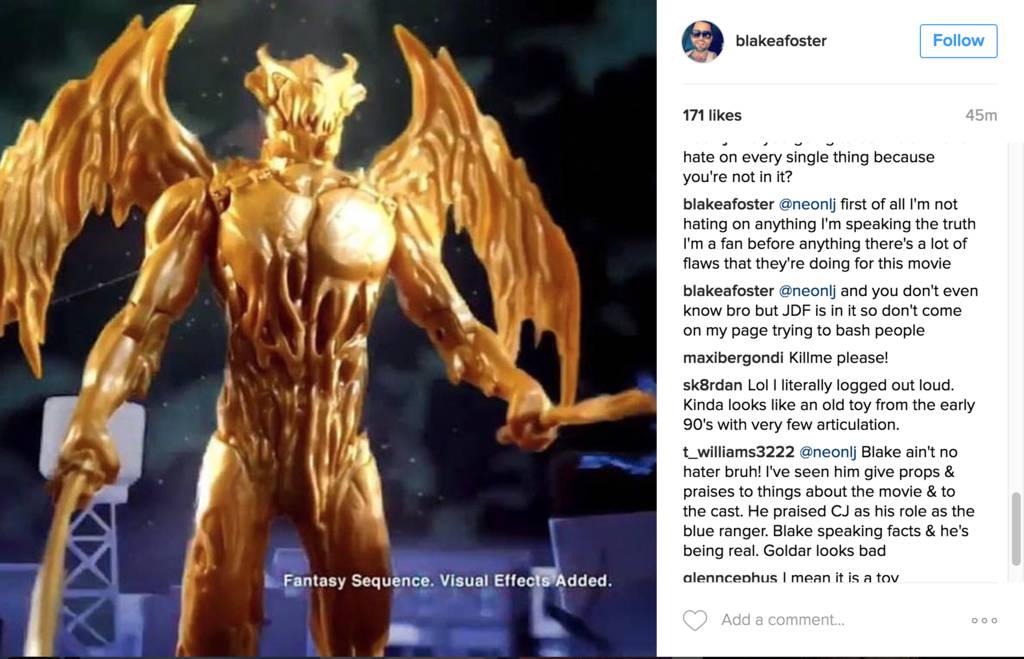 The "confirmation" comes by way of Blake Foster, who may be better known to fans of the Power Rangers franchise as Justin Stewart/Blue Ranger from Power Rangers Turbo. Foster let the following tidbit out while arguing with another fan over his Instagram post about the new Goldar. According to Foster's words, "JDF is it," it seems as though the franchise insider is confirming a longstanding fan hope that Jason David Frank could make some kind of cameo in the Power Rangers movie. It's easy to see Foster being "in the know" on this, since he and Frank were co-star on Turbo.

Frank played fan-favorite Tommy Oliver in the Mighty Morphin Power Rangers '90s TV series; Tommy began as the mysterious (and villainous) Green Ranger, before joining the good guys and eventually evolving into the White Ranger. He would continue with the franchise, playing Tommy in other franchise installments like Power Rangers Zeo, Power Rangers DinoThunder, and of course, Power Rangers Turbo.

Frank remained in the limelight after Power Rangers as a MMA fighter, and has recently gained back some serious geek cred after being cast as Bloodshot in Valiant Comics' upcoming TV series, Ninjak vs the Valiant Universe.

Do you want to see Jason David Frank in the Power Rangers movie reboot? Let us know in the comments!

“Saban’s Power Rangers follows five ordinary teens who must become something extraordinary when they learn that their small town of Angel Grove - and the world - is on the verge of being obliterated by an alien threat. Chosen by destiny, our heroes quickly discover they are the only ones who can save the planet. But to do so, they will have to overcome their real-life issues and before it’s too late, band together as the Power Rangers.”

Power Rangers: Is Jason David Frank In The Movie Reboot?