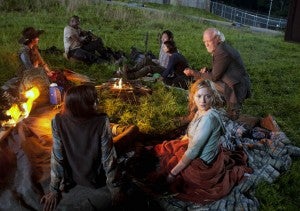 Major spoilers ahead for anyone who hasn't yet watched the third season of The Walking Dead. In an interview with the Los Angeles Times's Hero Complex blog earlier today, The Walking Dead showrunner Glen Mazzara said that en episode earlier this year in which two major characters died happened in part because the writers thought one death would obscure the likelihood of the other and make for a more exciting episode overall. "The idea of T-Dog having this heroic death — because it is a TV show and people think, Oh they're never going to kill major characters — once you kill a major character like T-Dog in the episode, it lets you off the hook because people think, That's it, that's the big moment in the show," Mazzara said. "The idea that there's an even bigger moment right behind it isn't really done on other shows. Just when you think you're safe as a viewer, don't get comfortable because there's another thrill coming right around the corner. That was by design. The T-Dog death was there in a sense to hide the Lori death and to make it even more surprising." He added, "We always want to have a sense of danger, a sense of threat. The second thing about killing off those characters is that it puts Rick's sanity into question. He obviously faces that trauma and starts hallucinating and everything at a time when he's going up against a very formidable foe, the Governor." He also teased that there will be a death at about the midway point of this weekend's midseason finale.