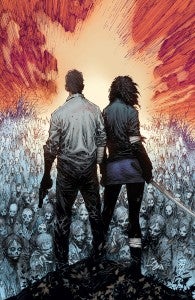 Earlier today, Robert Kirkman joined ComicBook.com to talk about The Walking Dead, the long-running zombie apocalypse series he created which has spawned a hit TV series, a blockbuster video game series and which consistently outsells staples like Batman and The Avengers in the trade paperback and bookstore markets. Along with artists Tony Moore and (later and much more regularly) Charlie Adlard, Kirkman has generated the biggest, most successful new franchise in comics since the founding of Image Comics, of which Kirkman's Skybound Studios is now a major part. If it seems that the intimate, day-to-day nature of the comic's early days have been traded in for a more epic, widescreen take on the tale that's friendly to the trade market and the burgeoning Walking Dead media empire, Kirkman says it's not on purpose. "There's not any real conscious change to how I tell the stories in the comic books but I guess over time my storytelling style has changed," the writer told ComicBook.com. "It's interesting to me sometimes to think about how, when the series started, I was 23 or 24 and now I'm a very different person--I didn't have kids back then and now I've got a six-year-old and three-year-old, and I live in a different state. I'm almost 34 years old and I'm still doing the same comic. It's been the same writer for this entire series but my life was vastly different. Those differences--you can't help but have them creep into the story. I think it adds to the flavor of the series becuase I'm growing and changing over the life of the series." Certainly fans over the years had questioned the degree to which his family life would change the tone of the story after he admitted in letter columns and interviews that as a parent it's harder to do awful things to children in the book--but, almost to spite himself, the book has done just that a number of times, including one particularly notable example from which the cast still hasn't recovered, and which he said in a recent Comic Book Resources interview still haunts him. It's a book that's consistently trying to reinvent itself, with a new twist every six or eight issues that leaves readers talking for months. A recent change has involved crafting a literally larger world for his character to exist in. Throughout the last ten years, the characters in The Walking Dead have struggled to survive as nomadic settlers in small camps, or occasionally by setting up larger (but still not particularly large) communities in which they could try to reacquire basic dignities like running water and fresh food. It's only in the recent past that the characters have discovered that they aren't unique--that there are several, possibly dozens or hundreds, of similar groups trying to re-establish some sense of order and community. It's a high-risk, high-reward game for the characters to play and reflects a sense that, even starting at life and death, there are still ever-rising stakes in The Walking Dead. "The [TV] show has been so interesting and so popular thus far, it's really interesting to me to think that season three is where we really get to the good stuff," Kirkman said. "That this far in, going into season three and having so much more good stuff to go that people don't know anything about if they're just watching the show and haven't read the comic."

With the hundredth issue of The Walking Dead around the corner and Comic Con International taking place in San Diego around the same time, it was pretty obvious that this was going to be a Walking Dead-heavy convention. But outside of the convention center walls is where the real action is, with the city's Petco Park serving as the scene of The Walking Dead Escape, an interactive "zombie run" where fans can participate as survivors, walkers or just spectators and get a real feel for Rick Grimes' escape from zombie-infested Atlanta. "I'm definitely going to do that," Kirkman said of the obstacle course. "I'm going to be jogging for the next few weeks to make sure that by the time I get there I can run for any length of time." I wonder what he'll do with the convention-exclusive variant of The Walking Dead #100 that all the participants get? Surely he's got his own copy somewhere...! The run is an extension of the zombie runs that have gained some traction over the last few years, many of which have used the "Walking Dead" name without actually being affiliated with Kirkman or Skybound, just because it's a popular franchise. Says Kirkman, though, "This is the first official one and it's gonna be the best one. We've got a lot of cool stuff planned for it; it's really just crazy. It's like an amusement park ride when you get in there." So join Kirkman at San Diego, he said, and they'll be sure to throw some fake blood on you--unless you don't want it. Apparently in the Walking Dead Escape, the blood is optional. Man, those adaptations are never anything like the comics, are they?