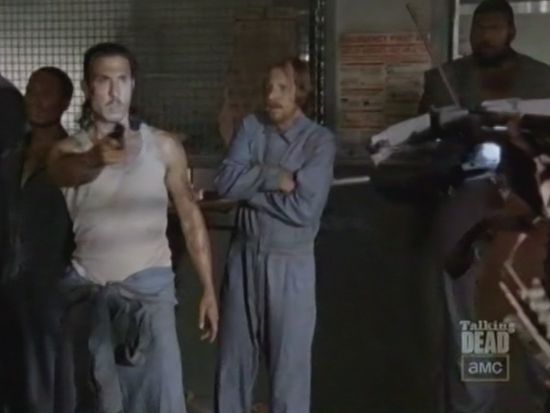 At the end of The Walking Dead season 3 premiere, Rick and his group encountered other survivors in the prison. Even though only a brief glimpse of the other survivors were shown on the season 3 premiere, previews of next week's Walking Dead episode on Talking Dead and Comic Book Men provided more details. During the Talking Dead preview, what happens right after Rick's group first encounters the other survivors is shown. Rick Grimes is working to try to stop Hershel from bleeding out, while Daryl instructs the other survivors to come out from behind the wall. Once the other survivors emerge, their bluish-gray coveralls make it obvious that they were prisoners. One of the prisoners asks, "What happened to him?" Darryl replies, "He got bitten." The prisoner then reaches for a gun, which leads to a stand-off between the two groups. Glen leaves to get medical supplies, while the zombies can be heard rattling a door behind T-dog. During the Comic Book Men preview, the five prisoners walk out in front of Darryl. One of the prisoners says, "Cell Block C, Cell 4, that's mine gringo, let me in." Darryl replies, "Today's your luck day fellows. You've been pardoned by the state of Georgia. You're free to go." The prisoner asks, "What you got going on in there?" Darryl replies, "It ain't none of your concern." The prisoner starts to pull a gun and says, "Don't be telling me what's my concern." 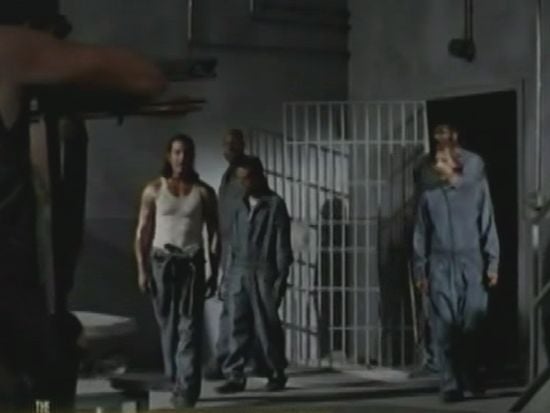