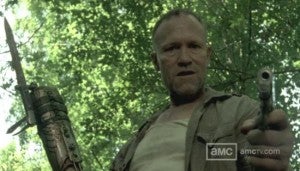 star Michael Rooker, who has worked with Guardians of the Galaxy director James Gunn on his previous projects Slither and Super, is reportedly interested in taking on the motion capture/voice acting role of Rocket Raccoon in the upcoming Marvel Comics adaptation. "Oh, yeah. Most certainly," Rooker told MovieWeb when asked if he'd be interested in the part. "I know that James Gunn is doing it. He is directing it, and he is re-writing it. He is a very loyal director. He is a very loyal writer, when it comes to working with people that he knows and loves. He really appreciates the efforts that each actor puts into these roles. And I would be very honored and pleased to work with James Gunn again." The actor added, "Whether it will happen or not, I don't know. But he is a dynamite guy, and we have remained friends ever since we worked together on Slither." Of course, there are barriers in place; Nathan Fillion has said it's unlikely he'll join the Marvel Cinematic Universe anytime soon because of the fairly major time commitment it demands and the fact that he's incredibly busy on Castle. Rooker not only has a similar TV commitment (although who knows for how long, since it's The Walking Dead?) but also seems as though he hadn't seriously considered Guardians until it was presented to him by the interviewer. "I haven't done much research on it at all yet. Because I don't know what is going to happen. I'm really crazy busy with The Walking Dead right now. But you know what? Write this up. Tweet the f--k out of it. If the fans want me as Rocket Raccoon, Marvel will listen to you guys, I think, sometimes...Perhaps I will be lucky and blessed enough to go in there, and go at it with Mr. Gunn again, who knows? " That perspective--that it's up to the fans to let Marvel Studios know what they want--echoes some of what Clark Gregg said earlier in the year when he suggested that it's probably up to the viewers whether Agent Coulson returns to the Marvel Cinematic Universe or whether The Avengers is his last movie in the role. Rooker also noted that, as a fairly experienced video game actor, Rocket Raccoon would be a role pretty well-suited to him. "I have done a bunch of motion capture for Call of Duty," the actor explained. "For the last ten months, I have been working on Black Ops 2, as Mike Harper. We've done many hours of motion capture and voice over stuff. All of my movements and facial gestures will be in the game. Expressions, voice, even my likeness, because it looks like me. He's just younger." He noted that there's a map pack where fans can actually play AS Michael Rooker, against zombies. "Look, this is a major deal. They have really gotten into this motion capture for these games. The voiceover is just one section of it. Motion capture is a big part of bringing these games to life. And bringing the character to life. In Black Ops 2, we had a lot of people who lent their voices to different characters within the piece. There are multiple levels on these games nowadays. They are quite complex."

The Walking Dead's Michael Rooker Interested In Guardians of the Galaxy