One look at our Fall Movie Preview will tell you that September isn't the greatest month to visit your local theater. As summer winds back down into the fall routine of work and school, the only real beacon of hope for entertainment comes in the form of fall TV premiere season.

With fan-favorite shows returning, and a slew of new shows set to hit the network airwaves for a chance at becoming the next pop-culture fixation, fall network TV premieres are an event that everyone looks forward to.

Or at least: they used to be.

In the modern world, original programming on premium cable and digital streaming services carries just as much (if not more?) weight than a show appearing on one of the big four networks. With that being the new reality, we have to ask: Does network TV fall premiere season still matter as a major event in entertainment? Or is all the pomp and circumstance outdated and unnecessary? 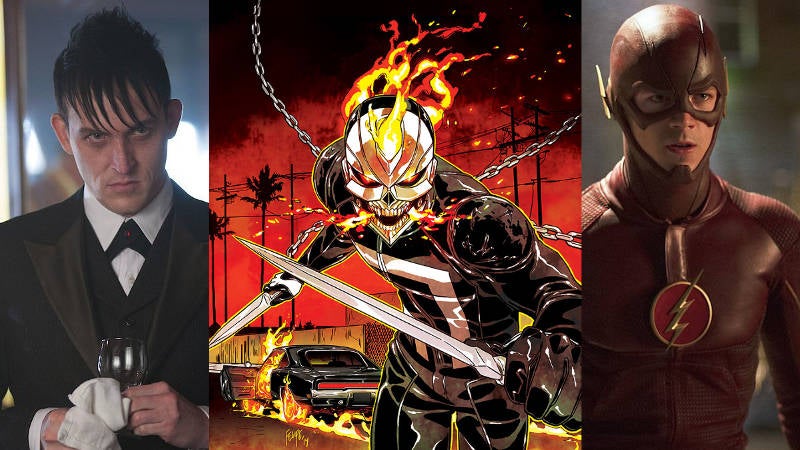 First of all, let's separate the wheat from the chaff: not all network TV is equal.

In the modern entertainment industry, there is a clear frontrunner when it comes to must-see television: comic book TV shows reign supreme. The CW has demonstrated foresight way ahead of its network competitors by building a DC Comics TV-shared universe. That programming block now stretches from Monday through Thursday (with the move of Supergirl from CBS to CW), locking down the 8pm primetime slot with a show almost guaranteed to have a following, thanks to lure of shared universe immersion. Best of all: by linking the shows together, The CW has positioned itself as a go-to destination for "must see" television, still able to put viewers on couches for live broadcasts of its content. It's no surprise, then, that Supergirl, The Flash, Arrow and Legends of Tomorrow are all (respectively and collectively) considered to be buzzworthy network TV fall premieres. Of all the new network shows, NBC's Powerless has generated a fair amount of buzz, almost entirely because of the the fact that it's directly tied to Warner Bros. DC movie universe.

Even without all those shared universe connections, Fox's Gotham stands on its own as one of the most highly-anticipated and popular returning networks shows this fall - and Marvel's Agents of S.H.I.E.L.D. has only gained more of following over time, with season 4 poised to re-launch Ghost Rider as a MCU character. If we were discussing cable comic book shows like The Walking Dead as well then this wouldn't even be a comparison.

But beyond that sub-genre of show?

The truth is that other types of network shows don't have the impact that they used to. Outside of the geriatric demographic (that CBS fan base), there's been a steady decline in buzz around network TV premieres each year, as younger viewers seem unwilling to jump into the sea of political/espionage/cop/hospital/courtroom dramas and/or generic sitcom comedies that overflow the primetime network airwaves each year.

It's almost become policy that skeptical (savvy?) viewers wait to see which series get canceled and which continue on into popularity, before making an investment with their time.

Ironically enough, a lot of viewers wait until streaming services like Netflix and Hulu filter out the hot new TV series to watch, before they jump in - meaning the same services whose original programming already makes the playing field harder for network shows to find a foothold, also get to reap the gems that emerge from the premiere season pileup (whether popular shows, or dead shows with dedicated followings).

(Can you even name the new show Kiefer Sutherland is headlining this fall?)

So, unless you're really set in some old ways, then chances are that you probably aren't plugged in to what is happening with network TV premieres this fall - nor do you need to be. In fact, avoid the rush, catch some of the better shows on cable and streaming, and give it a few months. By the time the holiday season arrives, end up with a nice a la carte menu of network TV fall series leftovers to pick from in your streaming service watchlist.

Are there any new network TV shows you're looking forward to this fall? Let us know (why) in the comments! Or tweet me @ppnkof