The return of Star Trek: Discovery is less than one month away, and CBS All Access has released a batch of new character posters for the show’s second chapter.

Each poster also features the tagline “Discover the Unknown.” This is a reference to the midseason finale, in which the USS Discovery jumped into uncharted space. The fact that each character has their back turned in their poster may be a tease for the upcoming mirror universe episodes.

Check out the posters in the attached gallery. 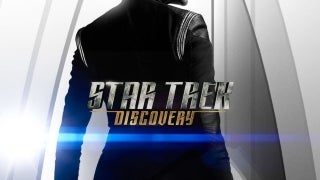 While Star Trek: Discovery has been on hiatus for the holidays, stars like Jason Isaacs and Shazad Latif have been responding to the initial backlash from fans that followed, and even preceded, the show’s debut.

“When we make it I’m enjoying what we’re doing and the rest we don’t have any power over,” Latif said. “It’s like a painting, if people don’t like it then they don’t like it. We can’t really do much about that."

“I thought it was just a sign of how unbelievably passionate and protective they were of this legacy, and before we were on the air they were reacting to a trailer or something,” Isaacs said. “Micro-analysing every frame of it. Now that we’re on, I’m a bit disappointed that the dissent has died down. I liked when people were outraged by things, and mostly everyone’s loving it all over the world now. I seek out those people who are upset because they’re always more passionate, first in line to watch it and first to hit the internet afterward. They’re probably more die-hard fans than anybody else.

“Every new series that came along was hated instinctually by everybody and slowly they were won over. I think we’ve won them over. Quickly, which is a bit of a shame.”

Star Trek: Discovery returns for chapter two on CBS All Access on January 7, 2017.