The Star Wars universe is opening up to a lot of new possibilities, with Rogue One: A Star Wars Story being the very first of a new line of Star Wars standalone films, meant to showcase one-off stories of the saga.

Rogue One is indeed a different sort of Star Wars movie - a darker and grittier war film that trades in staples of the main Episode format in exchange for offering fans a different flavor of the Star Wars brand. With Rogue One now out in theaters and projected for a big opening weekend (and the critical acclaim to got with it), we got to thinking about another particular Star Wars standalone film we (and a lot of fans) want to see:

Star Wars fans who have spent time watching both of the New Hope lead-in projects, the Star Wars Rebels animated series and Rogue One, can now attest: Seeing Darth Vader in his prime fighting years within the Galactic Civil War is not just awesome, it's downright terrifying.

Vader has made appearances in both the series and the film (not to mention canon comics and novels), and in both instances, his function is largely the same: he's an unstoppable, Sith, killing machine that wipes out pretty much anything in his path. In the context of a universe without an active Jedi Order, Vader is more akin to being a horror movie slasher like Michael Myers or Jason Voorhees, just with super powers. 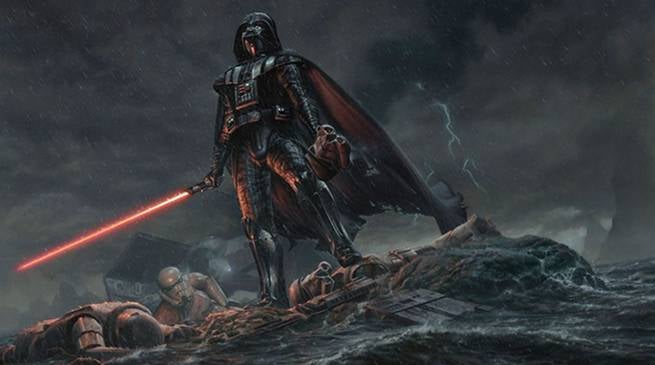 It's for that reason that we think Vader would be perfectly suited for a Star Wars movie that embraced the dark, horror movie tone of his presence in the post-prequel, pre-OT era commonly referred to by fans as "The Dark Times" (See? Already set for this style of film). It would be a simple premise to build around: Vader is sent by the Emperor to accomplish some mission and/or obtain some kind of MacGuffin, like the Kyber crystals needed to power the Death Star that could tie it to Rogue One, while we also meet a cast of characters (read: victims) who are woefully ignorant that their own quest is about to put them on a collision course with the Sith Lord.

There's the obvious appeal of seeing Darth Vader stalk and kill his prey; or watching him battle the one or two opponents who can actually hold their own against him (at least for a moment). However, like so money horror films these days, a Darth Vader R-rated movie would also provide opportunity to flesh the monster out - or at least pretend to.

Next: How Darth Vader Became a Badass Villain Again

Few Star Wars fans want to return to moments like "Emo Vader" and his infamous "Nooo!" scream in Episode III - Revenge of the Sith; however, Darth Vader, as a character, is able to emote and convey depth. He did so in all of the Original Trilogy movies, using just a pause and/or tilt of his head to indicate there was a thinking, living heart inside the armor. At times, even a conflicted heart.

Clone Wars had a small but impactful storyline (the "Mortis Saga") which featured Anakin meeting embodiments of the light and dark sides of The Force, and struggling with his own dark nature. An R-rated Darth Vader standalone would be able to have great fun with fan concerns about Vader being overly humanized, by teasing moments of Vader's humanity... moments that ultimately dissipate, as any blip of Anakin Skywalker drowns back into the Vader persona.

Beyond that, seeing Vader unsheathe his lightsaber for a worthy duel would be worth the price of admission alone.

"Rogue One: A Star Wars Story is in US theaters now. Directed by Gareth Edwards, it's the first of the new standalone features from Lucasfilm and Disney, which take place outside the core "Skywalker Saga" of films noted by an Episode number. Rogue One tells the story of the small band of rebels that were tasked with stealing the plans to the first Death Star. The story spins directly off the opening crawl from the original Star Wars: Episode IV - A New Hope. In that crawl, it read: "Rebel spaceships, striking from a hidden base, have won their first victory against the evil Galactic Empire. During the battle, Rebel spies managed to steal secret plans to the Empire’s ultimate weapon, the DEATH STAR, an armored space station with enough power to destroy an entire planet."