The Walking Dead appears to be at its best when it closely mirrors Robert Kirkman's source material. Such was the case in Sunday's penultimate episode of 2016, Sing Me A Song, which saw Carl hitch a ride over to Negan's Sanctuary on an assassination mission.

The ensuing moments were pulled directly from issue #105 of The Walking Dead comics. While some of Negan's harsh language is significantly beyond the limits of what is allowed to air on television, most of it was adapted nearly verbatim to live-action.

On the following slides, we take a look at some of the most iconic moments from The Walking Dead comics compared to their adaptation to Episode 7x07.

Be warned, this of course means spoilers for Episode 7x07 and issue #105, but also a bit of harsh language in the panels from The Walking Dead comics.

Negan and Carl had a man to man conversation after Carl gunned down a few of his mean (four less than he did in the comics) but it was a tough moment for little Grimes.

Negan forced Carl to remove his eyepatch just as he did in the comics. The sarcastic scrutiny of Carl was ever present in The Walking Dead comics as the scene was almost word for word on television, right down to, "I want to see what grandma got me!"

Negan's wives were one of the many elements of The Walking Dead comics brought to television on Sunday -- though they had a bit more clothes on. Rather than being stripped down to their underwear for Negan, the TV versions of his wives wear black dresses.

As seen in the photo below, Negan had the same moment with Amber both in the comics and on television. Removing the foul language does little to hurt the adaptation at all as Jeffrey Dean Morgan brings a horrifying sense of cruelty to the scenes, anyway.

It's time for Mark to get the iron. It is what it is.

Some of the Saviors can't seem to accept that fact but want to live in the Sanctuary, anyway. Prime example: Mark.

Mark and Amber betrayed Negan's rules and as a result, he got the iron. The moment which revealed what happened to Dwight's face off-camera in Season 6 was one of the more horrifying comic book moments brought to life on Sunday night.

As you can see in the comparison photo below, the adaptation was spot on as Negan doled out punishment. 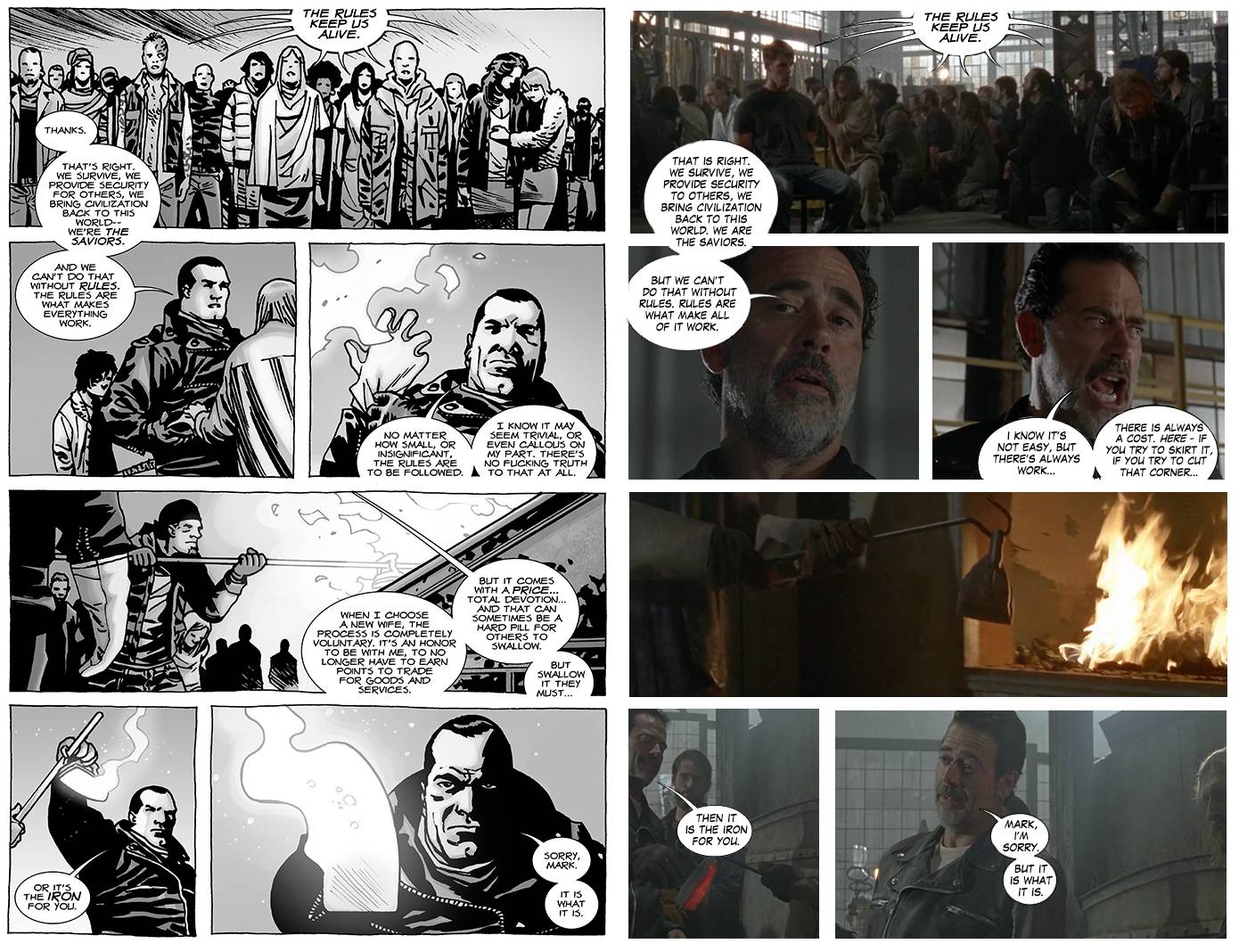 Among Negan's lessons for Carl was one in which he wanted the young boy to learn how to make and tak jokes. When Fat Joey brought Lucille upstairs for Negan, the villain teased the Savior in front of Carl before dismissing him.

Carl's bid at the Grammy Awards was the most iconic moment pulled from the comics on Sunday night.

After exposing his eye for the first time, Carl was ordered to sing a song for the villain. Of course, it was all part of Negan's manipulation and attempts to break the little Grimes boy -- which was made clear when he stood beside him and swung his bat the same way he did on Glenn and Abraham's skulls.

Even when Carl tries to pause, Negan's dialogue is ripped straight from the pages.

Fear the Walking Dead: A Clash Is Coming in Action-Packed Season 6B Teaser