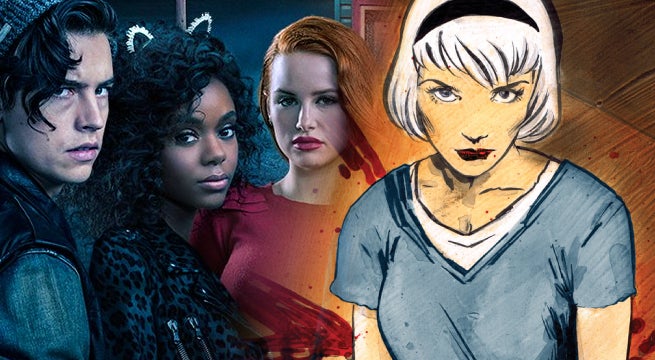 Riverdale's midseason finale has given fans a lot to take in, but could that include a tie to the show's Chilling Adventures of Sabrina spinoff?

Tonight's episode saw Jughead Jones (Cole Sprouse) rallying together his fellow Serpents, deciding that they needed to stop the reign of Penny Peabody (Brit Morgan). They kidnapped Penny and transported her to the nearby town of Greendale, which she saw as a sort of empty threat. Jughead then took things a step further by cutting off Penny's Serpent tattoo, signifying that she no longer has ties to the group and is run out of Riverdale.

Jughead's dark turn (and the squeamishness of thinking about Penny's arm) aside, the fact that Penny is now stuck in Greendale is interesting, seeing as that's the hometown of Sabrina Spellman, and the primary location of what is currently being called Sabrina.

Sure, Greendale has factored into Riverdale before, namely when Geraldine Grundy (Sarah Habel) was murdered by the Black Hood, and when Jughead and Archie (KJ Apa) delivered a mysterious crate for Penny. And while Penny could (and probably will) make a return to the town of Riverdale at some point, the possibility of Greendale being her new base of operations could play into Sabrina.

While Sabrina will deal with some of the more fantastical, horror-based elements of the Riverdale world, its safe to assume that some more realistic things will factor in too. Penny and her drug trade happening in the background of Sabrina certainly could be possible, which could culminate in anything from a name-drop to a sort of cameo appearance from Morgan down the line.

As of right now, it's too early to tell, especially since Sabrina is still in the early days of casting. Fans will just have to wait and see if Sabrina ends up going toe-to-toe with the Snake Charmer.

Riverdale will return from midseason hiatus on January 17, 2018. Sabrina currently has a two-season commitment on Netflix, and is expected to debut sometime in 2018.

Did 'Riverdale' Just Hint at a Connection to 'Sabrina'?