(Note: This review covers episodes 1 - 6 of The Punisher Netflix series.)

The Punisher may seem like the latest in the assembly line of Marvel Netflix series, but it definitely breaks the usual mold to offer fans a surprisingly deep and nuanced tale of violence and the trauma it leaves in its wake. It's unlike anything else in the Marvel Cinematic Universe, and ranks up there with the best of the Marvel Netflix brand (Daredevil season 1, Jessica Jones).

Keeping things spoiler-lite, the Punisher solo series picks up with Frank Castle (Jon Bernthal) trying to find a new path as the vigilante known as The Punisher, while simultaneously trying to let the world (and any inquiring authorities) believe that Frank Castle is dead. Things of course go awry when some knuckleheads at the construction site Frank is working at get mixed up with mob business (a certain crime family that Punisher fans will be thrilled to see), forcing Frank back into his old ways.

That small act of vigilantism puts Castle on the radar of a mysterious ex-spy named "Micro" (Ebon Moss-Bachrach), who comes to Frank suggesting that the mystery of his family's brutal murder runs deeper than Castle ever imagined - possibly connected to his military past. That painful possibility is enough to bring out The Punisher full-force in Castle, with a world of pain waiting for anyone who dares to get in his way. But the more Frank maims and kills his way to the truth, the harder it is to avoid the authorities, crooks, and assassins all looking to collect their own pound of flesh from The Punisher.

There's a lot about The Punisher that not only works, but works well. Jon Bernthal carries the show with his gruff, rabid-dog version of Frank Castle, adding layers of vulnerability and empathy to the violent Marvel vigilante that few actors could pull off.

The Punisher makes good on Matt Murdock's courtroom testimony about Frank Castle in Daredevil season 2, by repeatedly plunging Castle (and the audience) into dream sequences of his family being murdered. While it's horror-style shock and awe for the audience, it allows Bernthal to play out a range of high-emotion moments, which explain why Castle (and Bernthal) is constantly living on the emotional edge. It's great performance and better character-building for The Punisher than we've arguably ever seen before, and right up there with the fantastic surreal memory sequences of Jessica Jones.

While Bernthal is a solid centerpiece, he also gets help from some other interesting characters, played by solid actors. Ebon Moss-Bachrach makes Micro a much more interesting character than the Marvel Comics version, with a lot of the early Punisher episodes revolving around Micro's attempt to convince a very skeptical Frank that they have mutual interests. Micro is a layered and complex character who's better than most Marvel Netflix sidekicks (sorry Foggy), and Moss-Bachrach is good enough in the role to keep you guessing where his arc may be headed.

Amber Rose Revah (Emerald City), Jason R. Moore, and Ben Barnes (Westworld) round out the main players as Homeland Security agent Dinah Madani, veterans counselor Curtis Hoyle and Billy Russo (Easter egg alert!), respectively. Barnes steals many a scene as Russo, a slickly charming private military contractor who used to be Frank's best friend in the special forces. Madani and Russo are both established well in the series, and get poised for interesting arcs over the latter half of the season. 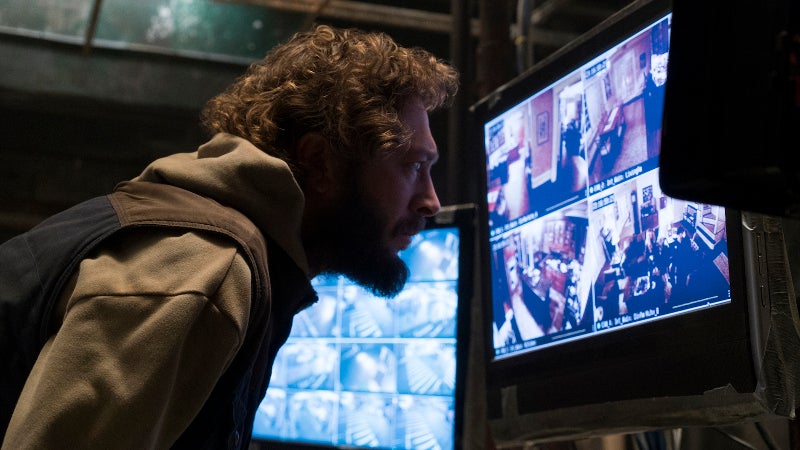 What's truly surprising about The Punisher is just how deep and layered its story really is. More than just a gritty crime story or formulaic superhero origin story, this series touches upon real and timely issues of war trauma and the cost of military service, offering a thought-provoking metaphor for what post-war life is for modern soldiers, and how the scars of violence make it hard (or impossible) to ever acclimate to the civilian world again. The side stories about the men involved in Frank's special forces unit, or those taking part in a local veterans support group, are far more interesting than the usual Marvel Netflix series subplots, making The Punisher a relevant and timely show that's hard to compare to anything else currently on television.

Finally, the action in The Punisher is as satisfyingly dark and violent as would be expected, but also refreshingly more restrained and cinematic than the often cartoonish levels of brute violence seen in Daredevil season 2. A lot of Frank's kills are shot in artful style and use clever setups and executions (pun), while often holding back from showing full gore, opting instead for off-camera violence or reverse perspectives (watching Frank's face as he snuffs out another life). The fifth episode, "Gunner," is an especially good showcase of clever filming techniques used to create an elaborate action sequence in a stripped-down woodland setting.

Keeping the obligatory connective threading between series, we get Deborah Ann Woll's Karen Page crossing over from Daredevil to The Punisher. While Woll is as adapt as ever at playing the character, Karen has had a kind of ill-fit presence in the MCU thus far (according to many fans), and The Punsiher just compounds that problem.

Not all the blame can be put on Karen, though; The Punisher lags in several places, with half-cooked "will they, won't they" romantic subplots. Karen and Frank's deep and sensitive personal talks never feel earned, while scenes of Frank meeting with and growing close to Micro's ex-wife Sarah (Jaime Ray Newman) and her two kids veers into some very awkward territory that just feels utterly out of place for the character and series.

For those worried about previous Marvel Netflix series pitfalls coming into play, there are definitely two that do. First: The Punisher is as formulaic in structure as any Marvel Netflix series, with obligatory staples like a hallway battle, an episode where the hero is injured or immobilized in some way, and an episode heavily built around flashbacks. Secondly, the first six-episode arc ends with some now-obligatory twists, which could send the second half of The Punisher into some very Luke Cage-ish territory. We'll soon see.

All in all, however, Marvel's The Punisher is the most successful adaptation of the character by far, and should give fans hope that there is still a lot of potential for some great Marvel Netflix series to explore, outside of the main Defenders storyline.

Marvel's The Punisher season 1 starts streaming on Netflix November 17th. Check back soon for our review and/or recap of the final seven episodes.

The PunisherSunday at on Netflix

'The Punisher' Review: The Next Great Marvel Netflix Series Has Arrived

Everything Coming to Netflix, Disney+, HBO Max & Other Major Streaming Services in November 2022

Critics Choice Awards Nominations Include House of the Dragon, Andor and More

Stranger Things: Metallica Reveals Why They Let Netflix Series Use "Master of Puppets"