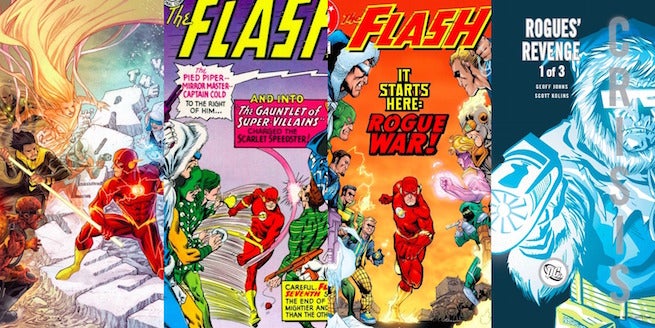 By continually adding members to Cold’s crew (earlier this season, Cold evolved from a solo act to a duo when Heat Wave joined his side), The Flash is presumably setting up the eventual formation of the Rogues, one of the greatest supervillain stables in comic book history. While we’re still a few criminals shy of the full-fledged Rogues, we still wanted to celebrate “Rogue Time” by highlighting the Scarlet Speedster’s five greatest Rogue tales. 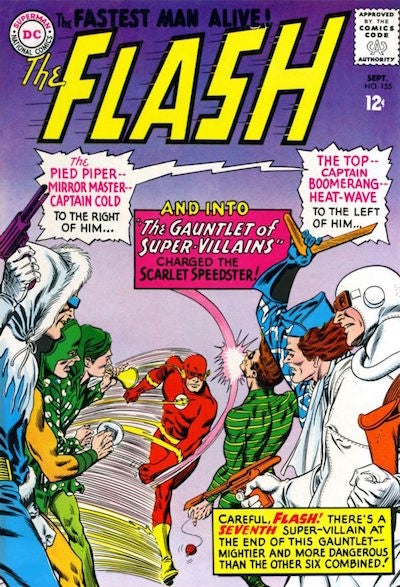 Similar to the The Flash’s current events, the comic version of the Rogues also began intermittently. Captain Cold first united with Heat Wave in Flash #140, but the Flash’s takedown didn’t become a concerted group effort until about a year later when the super-intelligent simian, Gorilla Grodd, broke Cold, Heat Wave, Mirror Master, Captain Boomerang, the Top and Pied Piper out of prison. And thus, the Rogues were officially formed.

Frankly, the Rogues should have easily destroyed the Flash in this issue. Particularly, there’s one scene where after the Scarlet Speedster trips, the Rogues simultaneously blast him with their weapons. Barry vibrates fast enough to become intangible, however, and escapes.

The Flash’s implausible success aside, this comic was a tremendous amount of fun. It combines the powers and personalities of a colorful group of villains to great effect. Someone at DC must have realized that they hit gold the Rogues, as future issues show evergreen members discussing how that inaugural team-up was planned as a one-time affair. Instead, it evolved into a lifelong brotherhood. Awww, villains have feelings too. 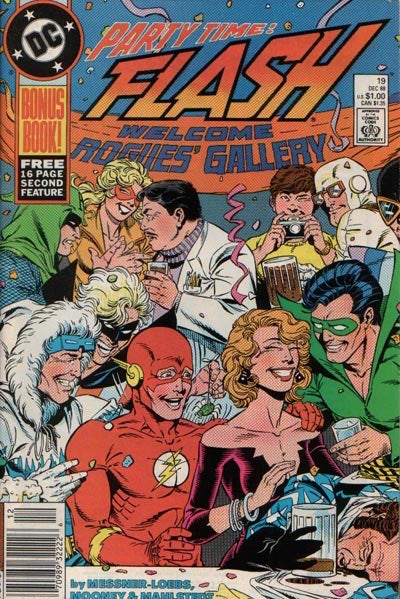 Fans of introspective, self-aware villains will love this standalone story from the William-Messner Loebs run on "The Flash." Here, Wally West, Barry’s nephew, had worn the red and yellow for almost two years after his uncle’s death in Crisis on the Infinite Earths. That’s when Wally gets an invitation to a party celebrating Captain Cold’s release from prison.

The situation stirs numerous great character moments between Wally and his uncle’s former adversaries – who had admittedly mellowed out since Barry’s death. At one point, Cold tells Wally that the group could had achieved greatness if they hadn’t fallen into Barry’s “trap.” In other words, the Rogues were so distracted in trying to outfox the Flash, they never considered their true potential until after the cat and mouse game ended.
The story doesn’t tug on the heartstrings as hard as Geoff Johns’s Rogue-centric issues later did, but Flash #19 is still a stunningly thoughtful approach to villain characterization. Unfortunately, this new status quo removed the Rogues from the board until Johns jumped on The Flash more than a decade later. 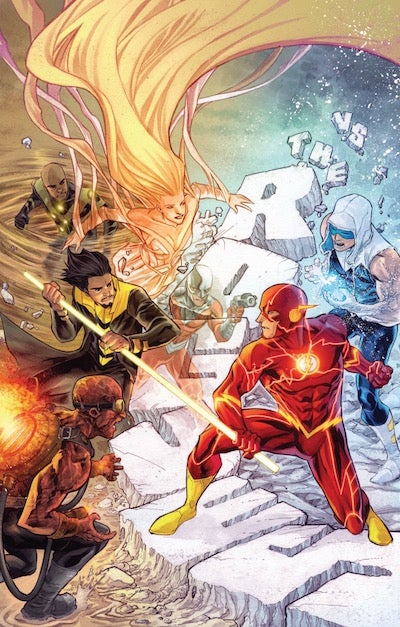 It’s the first significant Rogues story for the “New 52” generation of readers in this visually stunning arc from Francis Manapul (writer) and Brian Buccellato (artist). “Rogues Revolution” does a great job of introducing the Rogues and their quirky code of honor (nobody dies unless necessary, don’t act on petty instincts of vengeance and anger, and it’s all about “the score”), while crafting a story that features wholly unique character dynamics. It keeps the tale fresh and engrossing for fans who are already well-versed in their Rogue-isms.

Potential viewers of this week’s Rogues-centric episode of The Flash should note that “Rogues Revolution” emphasizes the relationship between Leonard Snart/Captain Cold and his sister Lisa/Golden Glider, as the siblings bicker over the proper ways for the Rogues to use their collective powers. But even without its potential connections to the small screen, “Rogues Revolution” is a great example of how the New 52 reboot could add new layers to some classic long-term characters. 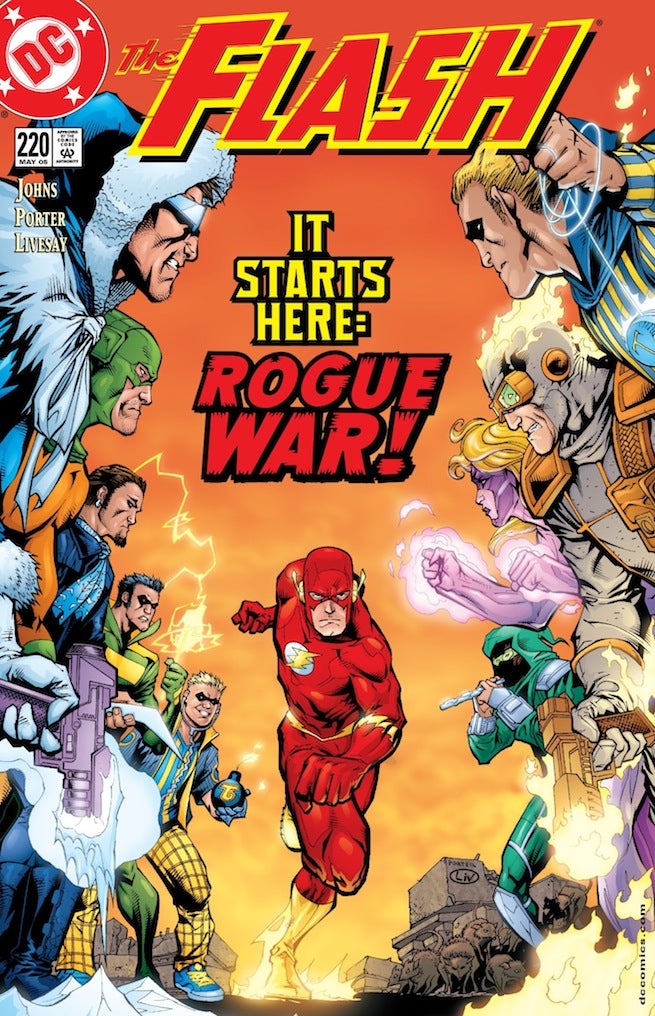 Johns’ love and appreciation for the Rogues is without peer., as the crew’s diverse mix of personalities and temperaments are “Rogue War’s” selling features. In this story, all of the Rogues are at each other’s throats under the belief that Wally had somehow rehabilitated one of their members. This leads to a twisty-turny story filled with reverses and double-reverses that not only challenges that cast, but also the readers with who is actually aligned with who.

As breathless as the story feels, Johns and artist Howard Porter expertly maintain a strong momentum. And if Cold, Heat Wave and Pied Piper’s (not to mention the Flash’s) fight with each other isn't enough, Johns/Porter heighten the drama in the story’s final act, which pits Wally against the unholy alliance of the original Professor Zoom/Reverse-Flash, Eobard Thawne, and the equally deranged Zoom, aka, Hunter Zolomon. One would expect a story starring so many villains to end in heartache, but Johns ties a wonderfully sentimental bow around his entire run with a deus ex machina that could make even the biggest cynics smile. 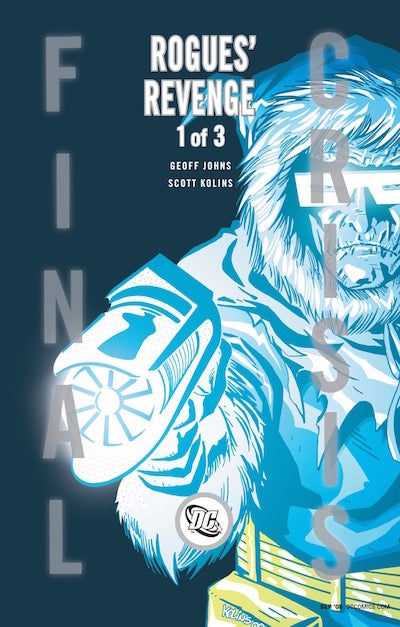 Geoff Johns and former Flash artist Scott Kolins return to Captain Cold and the Rogues’ world in this tie-in miniseries to Grant Morrison’s Final Crisis in 2008. The mini follows the Rogues as they debate retirement after they broke their inadvertently number one “rule” (don’t kill a “speedster”) when they killed Bart Allen, the second Kid Flash, in 2007. Instead, Cold reunites the band “one last time” as they plan revenge against Hunter Zolomon and his new protege Inertia/Reverse Kid Flash for allegedly “tricking” them into killing Allen.

Similar to some of Johns’s earlier Flash stories, Rogues Revenge is a character-centric look at the entire team. It explores Cold and his comrades’ psychology and twisted (though shockingly consistent) moral compass. But what makes this story excel past many of its predecessors is its strict focus on the Rogues’ introspection and characterization. Readers who love complex looks at villains will devour the nuance of Johns’s narrative, highlighted by his mastery of Captain Cold. Case in point: There’s a scene where Cold tells his colleagues there’s no such thing as evil, just varying shades of gray.

What's your favorite Rogue story? Let us know below!