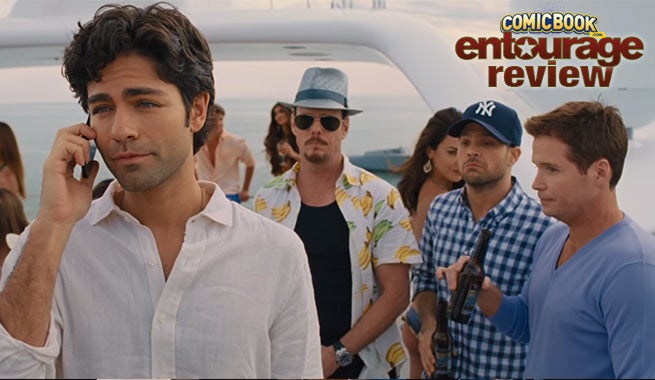 It's been four years since we've been able to hang out with our friends Vince (Adrien Grenier), E (Kevin Connelly), Turtle (Jerry Ferrara) and Drama (Kevin Dillon). This time we're not watching the boys at home on HBO like we did for eight seasons but joining them on the big screen for one more adventure in Entourage.

The Entourage movie picks up as if it were a 2 hour-season premiere and finale. Fans of the show will be able to hop right on the train but newcomers will miss some of the pleasantries presented in the form of references to Vince's series finale marriage or Drama's Napoleon complex. But just as Vince tells Ari, "It's all good."

After we're brought up to speed on the timeline since the series finale 4 years ago, the newcomers get a sufficient introduction to each character through a bit from Piers Morgan. Vince is a movie star fresh out of a quickly failed marriage. Johnny is Vince's fame-desperate older brother. Turtle turned a tequila brand into a multi-million dollar scheme. E, Eric Murphy, is a pizza boy turned manager. And of course, there's Ari Gold (Jeremy Piven), the retired agent turned studio head hungry to get back to work.

Entourage doesn't miss a beat in continuing the characters' stories from the HBO series. When Ari gets back to work and offers Vince a leading role in his first movie as studio-head, the ever-ambitious Vince will only accept if he also gets to direct the movie...with no experience directing. As usually done by the gap between seasons, we skip ahead eight months while the production takes place as the opening credits scene pulled almost identically from the series takes the screen. Entourage doesn't succeed in it's story but the ride sure is fun. Truth be told, the conflict of the film isn't truly Vince's combined acting & directing ability and when the true problem comes to light it's a bit silly and predictable.

After the movie, there's no doubt Entourage works better as a television series. In less than two hours, director Doug Ellin tried to cram in what would have otherwise taken place over at least eight 30-minute episodes which cheapens the plot. He manages to deliver each of the components from the series which reeled in audiences and kept them around for eight seasons but when it's stacked together so tightly it hurts pacing a bit.

Much like the series, it's Ari who steals the show - or in this case, movie. Piven brings the sarcastic, witty, hateful, driven, and fantastic character back to life as if he had never left him. The dynamic between Ari and his wife Melissa (Perrey Reeves), Lloyd (Rex Lee), his therapist (Nora Dunn), the other studio execs, and Vince is the most engaging and fun aspect of Entourage. No one can whip their sleeve into place or have such an energetically stressed FaceTime session quite like Ari Gold.

Entourage is just fun. Watching it will be fun just as it seems like making it was fun. There are too many cameos to count, including Jon Favreau, Gary Busey, T.I., and Rhonda Rousey playing a silly version of herself (don't tell her I said that). The little Rousey/Turtle romance would have been more fun over the course of a few episodes but is peppered into a movie divided, telling five character's stories.

Fans of the original series will likely walk away more satisfied than newcomers but everyone will share laughs. Understanding that E always falls in love and Turtle used to be fat will supplement a few jokes, which are often crude, but watching 96 episodes is not a required prerequisite.

Bottom Line: Although Entourage works better as a TV series, it still manages to become feature film which is fun to be a part of, if nothing else. 6.8/10

Are you watching Entourage this weekend?

REVIEW: Entourage Is Fun, But Better In Episodes