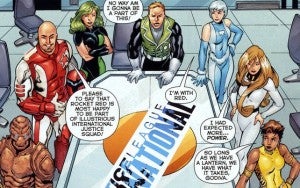 Earlier this week, DC Comics announced that Justice League International would end with its twelfth issue, shipping in August. That brings (at least apparently) to a close a five-year run during which writer/artist Dan Jurgens has worked on Booster Gold, a character he created in the 1980s and who leads the JLI.

The cancellation appeared to fly in the face of earlier comments by DC management that suggested they wanted to keep 52 titles on tap at all times, and ComicBook.com wanted to find out whether--assuming DC does have another, unannounced launch slated for September, Jurgens might be part of it. He couldn't say much, but Jurgens did join us for a few quick questions on the end of Justice League International, and what's next for him.

With the announcement that Justice League International will end with #12, we got no other announcements of cancellations or launches. Will you be picking up another series to keep the number of ongoings at 52?

Oh, yeah. I'm not going into retirement. Unfortunately, we can't announce it quite yet.

For all we old Booster Gold fans, will we see the New 52 Skeets before all of this is over?

The plan had been to unveil Skeets in #13. Since we're not going to get there, Skeets will be "heard" and not seen.

It seems as though things have been a little hectic for you since the New 52 started: you've been fighting fires and moving from book to book for a while now. Even before that you went from Booster Gold to the Time Masters miniseries to the Booster Flashpoint thing. Will your next assignment hopefully give you a place to settle down for a while?

Can't quite agree with the assessment. I was on Booster for four years, though six issues of that was actually the Time Masters mini-series. It was still Booster and the gang, however.

I do think, however, that a lot of this is reflective of wher e we're at as an industry. Creators are rotating through a much greater number of projects than used to be the norm.

"Stay (I Missed You)" Synopsis Reveals What To Expect From Roswell, New Mexico Season 2