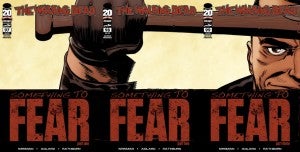 In addition to the widely-expected second print of The Walking Dead #100, the best-selling, single-issue comic book sold in the direct market since 1997, Image Comics today announced that they will be sending The Walking Dead #97, 98 and 99 back to print, effectively making the entire "Something to Fear" story available in second prints that will ship to comic book stores in August.

The three newly-announced issues will ship with new, interconnected covers for their second printings, featuring the new series villain Negan and his baseball bat, "Lucille."

The Walking Dead #100 sold more than 380,000 copies when it was released the week of San Diego Comic-Con International earlier this month, along with the exclusives given away at the Walking Dead Escape San Diego.

The Walking Dead #97-99 Go Back for Second Printings