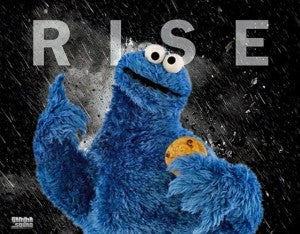 In a new parody video that mocks Christian Bale's controversial Batman voice, Gotham's dark protector is played by none other than veteran puppet actor Cookie Monster.

“Christian Bale is an excellent actor, he just got steered wrong,” NBC News quoted veteran Batman animated actor Kevin Conroy as saying of Bale during C2E2 this year. “Obviously someone should have stopped him and said, ‘You sound ridiculous.’”

Well, the Cookie Monster parody is my personal favorite of the many Dark Knight Rises parody videos we've seen so far, even if I don't have the same disdain for Bale's Batman voice that others do.

In the video, footage from Batman Begins is used, intercutting audio from Sesame Street:

“You really started something,” says Gordon.