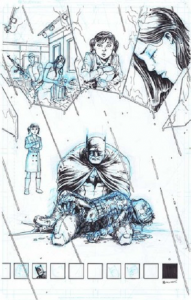 The auctions began earlier today and started with just a $1 minimum bid on each, but they've risen somewhat; the cheapest page at present is going for $405.

The final page, which pictures Batman cradling his dead son, is going for more than $1,000 already--a rare case where a page of original art will likely sell for more than the cover to the issue (currently sitting at $910).

There are also some minor differences to the art made before publication, most notably in the panel where Damian sustains his fatal injuries. In the original art, you can see his face and body in much more detail, whereas they were shadowed out in the printed version of the comic. It might be interesting to see whether the original version was ever colored and whether that might turn up as backmatter in the inevitable deluxe hardcover.