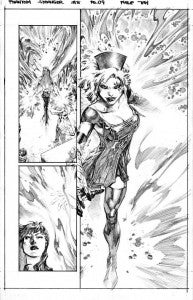 In the recent past, DC Comics have teased a number of new or retooled villains coming to the New 52 for the first time in the near future, but those teases have largely been limited to the "big guns." Green Lantern got Relic, the Teen Titans got The Joker's Daughter and Superman got the Cyborg Superman. Today, though, fans are getting a look at a new character who may be a hero or a villain--it's not entirely clear--but what is clear is that she's important, and she's going to be coming up in Trinity of Sin: The Phantom Stranger.

While teasing a preview of the upcoming The Phantom Stranger #8, due out in less than two weeks, DC Entertainment Co-Publisher Dan DiDio told his fans on Facebook to expect a new villain to debut in the issue...and then he gave them their first look at her.

"Out in less than two weeks, the mystery of Phantom Stranger's family is revealed (in more ways than one) and we introduce DC's newest mystical medic sensation, Nightmare Nurse. Guaranteed to make you think twice the next time you turn your head and cough," said DiDio in his first post, which pointed to a five-page preview of the issue.

That tease, and a look at the character, certainly suggest "villain," but in the context of the preview it appears as though she may be called upon to save the Phantom Stranger's life.

DiDio followed up with the image at right, saying nothing except to confirm for a fan who asked that the image was of "Nightmare Nurse, Mystic M.D."

Creed 3 Gets a Writer