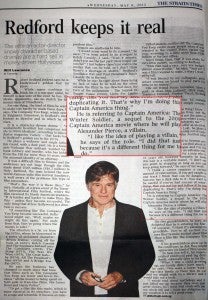 During a newly-released interview, screen legend Robert Redford appears to have revealed what may be a major plot point regarding his character in the upcoming Captain America: The Winter Soldier.

Potential spoilers from here on out, obviously.

In a new profile in the The Straits Times’ Life! print magazine, spotted and scanned by Here Be Geeks, Redford spoke briefly about his role as Alexander Pierce, a character from the comics whose film iteration will be the head of S.H.I.E.L.D. in the anticipated sequel.

But it's not that simple, apparently, as Redford strongly implied that Pierce is one of the bad guys.

“I like the idea of playing a villain," Redford said of the role. "I did that just because it’s a different thing for me to do.”

Of course, it's distinctly possible he's not the kind of bad guy everyone is thinking after reading that line. Following Nick Fury's apparent lie to the Avengers about the death of Phil Coulson, the shady nature of Marvel's biggest shady, governmental organization is expected to play a role in Marvel's The Avengers 2 and Agents of S.H.I.E.L.D. Perhaps by "bad," he simply means that he's the head of this ethically-questionable organization and that the hard decisions often are made by him and he has to rationalize them.