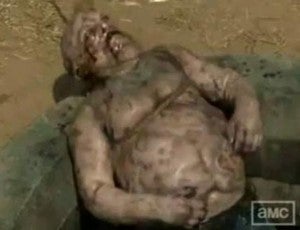 On The Walking Dead TV series, the vast majority of walkers are extremely thin. It has been rare that the show has ever shown a fat zombie. In fact the only two instances that spring to mind of fat zombies on the AMC TV series is the well zombie from Season 2 and the zombie that ate the remains of Lori Grimes in Season 3. There probably were a couple others, but those are the two that stand out.

In the letter column for The Walking Dead #111, a fan put the question to Walking Dead creator Robert Kirkman about why there weren't more fat zombies in the world. Robert Kirkman replied, “There are tons of fat zombies in the comic… less so in the show, as, frankly, it’s hard to ADD to big people to make them look like zombies. Keep in mind, to make those walkers look real, you have to build stuff, on top of real people… you start adding to people my size, and well… we start to look a bit too padded, if that makes sense.”

In the same letter column, Robert Kirkman also answered another important question in the world of zombies, which could also help explain the shortage of fat zombies. When asked if zombies pooped, Kirkman replied, "I’ve covered this before, I like to think they’re always pooping… undigested bits of flesh… it just passed right through. Fun!" If zombies are always  pooping, it could certainly explain why they rarely seem to put on weight.

The Falcon and the Winter Soldier Takes Sam and Bucky to “Different, New Waters”