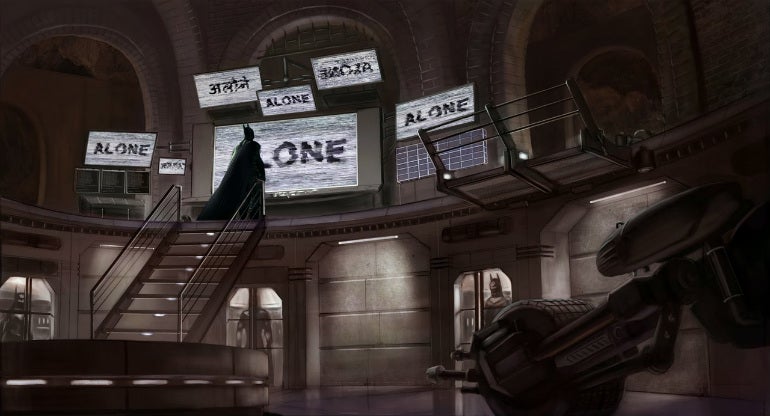 KDramaStars, a news and rumor site that often purports to have big exclusives and manages to be right enough for people to take them seriously, claims they've got a reliable source telling them about the Comic Con footage that will screen for Batman V Superman: Dawn of Justice.

They cite "Comics Central City" a couple of times but never link out, leaving a question as to whether that's a website, a retailer or something else. In any event, that third party site allegedly has seen footage online, and transcribed it. It's not clear whether the story is that the footage was taken down after, or why they would transcribe it rather than trying to get a screen grab or a copy.

All that said, it's believable enough to be at least considered.

The Batman vs Superman trailer starts with a dark screen with the voice over of General Zod's "you are not alone message" the screen slowly pans and it reveals that the scene is inside the Batcave. The camera slowly pans to a shot where you can only see the back of Batman but he is not yet wearing his cowl. Every monitor in the Batcave is playing Zod's video. After the message is complete, Batman wears his cowl turns to the camera and the trailer ends with the Batman v Superman: Dawn of Justice logo being revealed.

If true, though, this one owes a lot to fan art commonly seen online. As seen above, fan artists Gugoo and Larry Quach drew it up last year, suggesting it would have been a great post-credits sequence for Man of Steel.

There are also a fair number of similar fan-art pieces out there, depicting the stars of Arrow being brought into the DC cinematic universe with the "You are not alone" message."

Another problem, of course, is the 24-hour window given by Zod to Superman and Earth before he attacked. The notion that Batman wouldn't be able to get to Metropolis in that time, and wouldn't at least try to help, is perplexing...but then, how would he have missed the top news story in the world? It seems that particular piece may be a little out of place no matter how the movie plays out.

Batman V Superman: Dawn of Justice will hit theaters in 2016 and, if rumors are to be believed, Comic Con International: San Diego will see the release of the film's first footage, as well as announcements about as many as six previously-unannounced movies including Wonder Woman and Shazam solo films and a Green Lantern/Flash team-up.

Batwoman: The Hunt for Alice is On in New Preview

Batwoman Recap With Spoilers: Everyone Searches for a Second Chance in "A Very Un-Birthday Present"