The Rust saga is coming to a thrilling conclusion with Vol. 4, and we had a chance to talk about the action-packed finale with creator Royden Lepp.

Rust tells the story of Jet Jones and the Taylor family, who Jet has taken it upon himself to protect. This emotional story comes to an end in Vol. 4 Soul in the Machine, and Lepp spoke to ComicBook.com about which aspect of the series he's enjoyed the most.

"I've loved the opportunity to connect with readers at various intervals throughout the telling of this story," Lepp said. "Most creators write something and then put it out there and that's it. I've been able to hear from readers at every chapter of this series and that's been the fuel that got me through it. I've changed a lot, my life changed, I have a son, I'm older, I also have a more deliberate and confident approach to creating art and writing and I have that because of my readers."

While Jet is the focal point of the story, Ava and Oz are the heart and soul of it. Oz is especially prominent in the book's opening pages and is focused on one primary task.

This volume doesn't shy away from tough moments, and one sequence, in particular, will definitely pull at reader's heartstrings. That includes a line from the Engineer, who tells Jet "you were meant for this day," and Lepp gave us some insight into what that meant.

As with the rest of the series, Rust Vol. 4 is simply gorgeous and gives the story an impressive emotional weight. The visuals have always been stellar, but there was something a bit different about this final foray

"Thanks! Yeah it was. It was the end for me, I felt like I was pouring a little more love and care into each panel," Lepp said. "Not that I wasn't in the previous volumes, but this one was really important to me. I wanted it to end right. I really wanted the pacing and the panel rhythm to be a certain way to add weight and importance to this volume."

Even though the series has always employed the same visual style, there have been a few changes to Lepp's art along the way.

"I think in the first volume of Rust I was still learning how to draw the characters and I was still finding my voice as a comic writer, both visually and narrative," Lepp said. "In a lot of ways I was experimenting, figuring out what worked in comics and what didn't, what I liked about comics and what I hadn't seen done before. By volume 4 I was confident in my voice and in the story I was telling."

The book's final moments do leave the door open for a return to this world, and Lepp does admit that Oz could use the oil cell to bring Jet back to life.

Most of the volume's final moments aren't focused on Oz though, but rather on Roman and his attempts at processing grief. Rust is in many ways pulled from Lepp's own life story, and you can't help but feel that in the final pages.

"I wanted a satisfying ending for readers," Lepp said. "I didn't want to answer all their questions or complete the view of the world I just wanted the characters to feel ready to move on so that the readers could move on. And selfishly for me, writing Roman's letters to his Dad was very healing and cathartic. Volume 1 was published the year my Dad died so closing this volume was the closing of a particular season in my life. I wanted to be really proud of this book series when it was done and I wanted it to be personal. I knew that was only way it would be good."

While Lepp leaves the door open for more Rust adventures, that doesn't appear to be happening anytime soon. 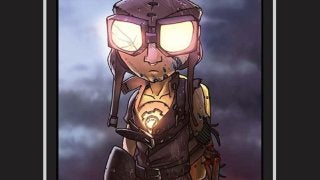 "I'm open to it but not planning it at the moment," Lepp said. "I feel like I've been living in the world of Rust for years, I don't know if I'm going to get to write another book or series but I'm ready to explore another world. I'm not sure what that is yet. I'm still going to bed before midnight and doing other things I couldn't do when I worked on Rust."

You can take a look at Rust Vol. 4 Soul in the Machine in the images above, and you can check out the official description below.

"Seven years in the making, the breathtaking conclusion to Royden Lepp's Rust graphic novel series is here! As an unprecedented robot force closes in on the Taylor farm, Jet Jones must embrace his true identity if he's to defend the family he loves."

Rust Vol. 4 Soul in the Machine is in comic stores now.

My Hero Academia: Koichi Should Appear In The Main Series