DC has provided ComicBook.com with an exclusive preview of Bane: Conquest #11, out next week from Bane co-creators Chuck Dixon and Graham Nolan.

The character, who would go on to become one of Batman's most popular villains and appear in Christopher Nolan's The Dark Knight Rises, first appeared in the Vengeance of Bane one-shot before serving as the big bad behind the fan-favorite Knightfall storyline in which he broke Batman's back.

Besides those iconic storylines, Dixon and Nolan tackled a number of Bane-centric stories in the '90s, including Vengeance of Bane II: The Redemption and Batman: Bane of the Demon. For a time, Bane's stories all seemed to flow through them, much the same way Dan Jurgens took point on any stories featuring Doomsday in the years following The Death of Superman.

It's not the first time recently DC has brought together beloved creative teams from decades past to revisit some of their most popular characters recently. Besides Jurgens on Action Comics -- a run that ended with #1000 last month -- recent miniseries or one-shots have seen John Ostrander return to Suicide Squad, Tony Isabella script Black Lightning, Marv Wolfman write Cyborg and Raven, and Cary Bates once again tackle Captain Atom.

Bane: Conquest was described at the time of its launch as "a twelve-issue series that will push him to the limit! Bane is seeking to create a global criminal empire with the help of his original gang, Bird, Trogg, and Zombie. The Man Who Broke The Bat moves beyond Gotham to find new cities to conquer and new enemies to crush. He won't stop until he stands at the top of the world of crime! For Bane, it's all about CONQUEST." 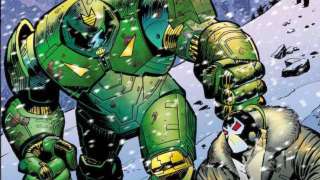 "It's very exciting to return with Chuck to a character we so love and are so identified with," said Nolan. "DC has allowed us to return him to his roots, bring back old friends and create new characters that will rock Bane and Batman's world. Dixon, Nolan, Bane…what's not to love?! This is, without a doubt, going to be the ULTIMATE Bane adventure!"

"Always happy to be re-united with Graham and this is an especially heady experience returning to our most significant contribution to the Batman mythos," said Dixon. "The best aspect of this project is that it's not a cameo or nostalgia tour for Graham and I. It's more like we're back after all this time to work on a truly epic story about Bane and we haven't lost a step."

You can see the preview pages in the attached image gallery and the official solicitation text below.

The penultimate issue of this year-long event starts and ends with action, as Bane and his company of villains invade Kobra's mountain stronghold with the aim of kidnapping the infant Naja-Naja. But one of Bane's newfound allies is actually his oldest enemy: Batman! The globe-spanning, universe-rocking gangster epic begins its climax here! Who will live? Who will die? And what will happen when the wrath of Kobra falls on the man who broke the Bat?