DC has provided ComicBook.com with an exclusive preview of Nightwing #58, from writer Scott Lobdell and artist Christopher Mooneyham. The preview, seen in the attached image gallery, features a cover by Mooneyham as well as a variant from Tyler Kirkham. In the issue, The Joker's Daughter is back! Or is she? While she wasn't shot in the head like Nightwing, Duela Dent might be facing an identity crisis even more traumatic than Ric Grayson's. Fortunately the new Nightwings are doing their best to protect Blüdhaven—learning as they go—allowing Ric to try to help steer Duela away from the life of a homicidal zealot of the crazy Clown Prince of Crime!

This could be a particularly interesting story, since the transition between Robin and Nightwing all those years ago was marked by the decision to distinguish and separate himself from his father figure (Batman), and here he has a chance to encourage the sometimes-good, sometimes-bad Joker's Daughter to do the same. Also interesting: the most widely-read story to feature the Joker's Daughter in recent years was likely Countdown to Final Crisis, which centered largely around Jason Todd, the other Robin to walk away from Batman. 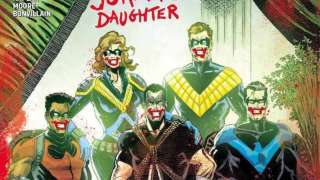 Grayson has recently undergone a number of transitions -- first from "Grayson," a largely un-costumed spy in the employ of SPYRAL during the pre-Rebirth comics from writers Tim Seeley and Tom King; and then later, from Dick Grayson to Ric Grayson, following a traumatic head injury that left him dealing with an identity crisis that writer Scott Lobdell has been exploring in his run on the character.

Timing-wise, this seems like an interesting choice, since the whole "Ric Grayson" thing popped up just as Titans was set to debut, with a more traditional version of Dick serving as the series' point-of-view character. Of course, it will not be until the second season, expected later this year, that Grayson takes on the Nightwing identity, having been either Robin or completely out of costume for the entirety of Titans's first season.

The real question is whether, in his compromised state, Grayson can handle the challenge of a shattered mind like the Joker's Daughter.

Nightwing #58 will be available in stores and online on Wednesday, March 20.