DC has provided ComicBook.com with an exclusive preview of Dog Days of Summer #1 -- specifically, the Superman/Krypto story from Jackson Lanzing, Collin Kelly, and Cully Hamner with colorist Dave McCaig. In the oversized one-shot, which will be released next week, the heroes of the DC Universe team up with their super-pets to take on a variety of threats. Also, Killer Croc is in it. You can see the preview pages in the attached image gallery, and the official solicitation text below.

With a Super Pets movie on the horizon, it seems like a solid idea for DC to start making these things more semi-regularly than they otherwise might. This one is filled with top-tier talent, which makes an oddball project like an oversized one-shot about the animals of the DC Universe into something people are keen to buy.

In the Superman/Krypto story, we get a clever reimagining of one of the most common tropes of superhero comics, and something that reminds fans that Superman is not the guy to just charge in breaking stuff, but that he's got some brains, too. You can check it out just below. 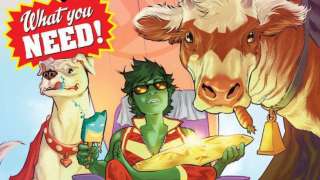 “Who let the dogs out?” DC does this summer as we unleash the beast within and join Krypto and Superman, Bat-Cow and Batman, Wonder Woman and Ferdinand and many more for eight sun-kissed stories in this can’t-miss animal-sized spectacular!

Back Issues: From Superman to Suicide Squad, Get Ready for Bloodsport