DC has provided ComicBook.com with an exclusive preview of The Flash #36, out this week from writer Joshua Williamson and artist Howard Porter.

The issue, which launches the "A Cold Day in Hell" storyline, sees one of the Rogues murdered inside of Iron Heights prison.

One has to wonder whether this might reflect some of what fans can expect on TV with Iron Heights warden Gregory Wolfe playing a big role coming up and an adaptation of "The Trial of The Flash" seemingly on the horizon. 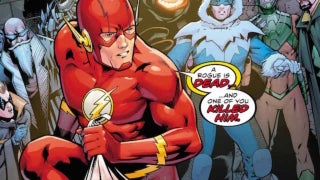 You can check out the preview pages in the attached image gallery and the solicitation text below.

"A Cold Day in Hell" part one! When one of The Flash's Rogues is murdered inside Iron Heights prison, Barry Allen throws himself deep into the case, still reeling from the turmoil of his personal life! But when the clues begin to reveal an even greater conspiracy at work, The Flash soon discovers Iron Heights' deadliest secret…