With Superman #1, writer Brian Michael Bendis and the art team of Ivan Reis, Joe Prado, and Alex Sinclair turn in a beautifully rendered, sometimes thoughtful, but ultimately uneven issue of comics that feels like it would be a very good Superman comic if not for a few strange choices that taint the whole affair.

Reis, Prado, and Sinclair turn in gorgeous art, which begs for a better overall comic. The storytelling in the action sequences is impressive, even if it feels like having Superman single-handedly do some of the things he is shown doing diminishes the villains and challenges in question and will lead to continuity headaches down the line.

That is a bit of an issue, across the board: Bendis here wants to reinvent Superman without acknowledging on the page that he is doing so. Changing Superman's power levels, some of his philosophies and relationships, Bendis makes choices that are not objectively wrong but that do not mesh with the Dan Jurgens/Peter J. Tomasi/Patrick Gleason-written issues that came out of Rebirth and of which Bendis' run is ostensibly a continuation.

The issue actually jumps off from the events of The Man of Steel, and like that miniseries it includes a few very nice character moments for Superman, Lois, and Jon in the flashbacks -- which underscore what is missing from the book now that Bendis has temporarily split the family up.

(The fact that the story arc is called "The Unity Saga" seems a pretty solid indicator that there will be, y'know, unity before it's all said and done.)

The choice to break them up and forgo some of the dynamic on display in the flashbacks is, obviously, an intentional narrative decision made by Bendis. Whether it is serving the purpose he hopes for, or hurting the comic, is difficult to say. Honestly, it seems as if — like with so many things in Bendis’s ultra-decompressed The Man of Steel — the writer is sacrificing satisfying single issues for a longer master plan that will pay off down the line.

Diminishing the single issue in favor of the bigger story is not just in the writing; Bendis’s own twist ending is completely undercut by solicitation text revealed months ago that spelled it out for anybody paying close attention. That is neither the fault of Bendis nor of the single issue, but it does impact the reading experience, especially since the twist may be the single most interesting narrative aspect of the issue. 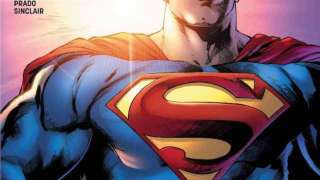 There are characters and concepts Bendis does not yet seem to have a handle on, either becuase he is redefining them in an unappealing way or just because he is new to DC. Only time will tell. J’Onn J’Onzz’s frankly baffling conversation with Superman in the issue is a six-page exercise in “WTF,” both because of J’Onn’s input and because of the distracting decision to show how cool Superman is by making J’Onn look ineffectual by comparison. That the conversation eats up a third of the issue makes it even more strange and frustrating.

Review: 'Superman' #1 Is an Uneven Start With Promise

The Suicide Squad: 11 Secrets We Learned On Explosive Set