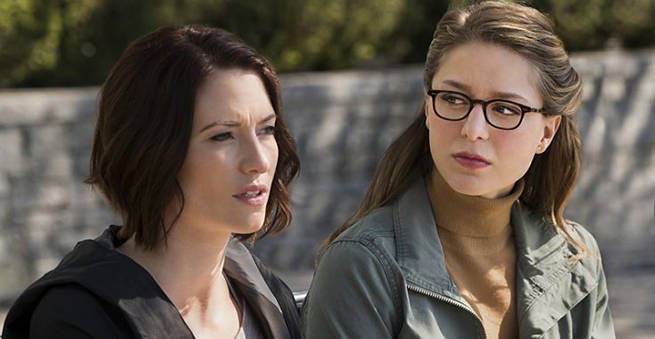 This article contains spoilers from the Supergirl episode ‘Homecoming.’

In tonight’s episode of Supergirl, we faced the bitter dilemma of Jeremiah Danvers returning to his friends and family only to find out that the character was now part of Project Cadmus, the primary antagonist of the show.

After faking his way into getting his access restored at the DEO, Danvers went on to steal the National Alien Registry, knock out J’onn J’onzz, and escape to get back to Cadmus HQ. In quite a tricky situation, Danvers’ daughter Alex had the chance to stop him but let him leave, much to the dismay of the rest of the DEO team members.

In an interview with ComicBook, Supergirl executive producer Andrew Kreisberg pointed out that Alex’s loyalties play a big part as this season progresses.

“The question of where do Alex's loyalties lie play a major part of the next episode and it's, you know, battle lines are drawn a little bit, which is interesting because it's you know, what I love about this episode and the next episode is no one is really wrong, you know, in a way,” Kreisberg reflected. Like, everyone, whether it's Mon-El or Kara or Alex or J'onn, you know, and especially the stuff between J'onn and Alex in 15, everyone is doing it because they love each other, even Jeremiah.”

It’s human nature to bend the rules for those we love, we see that every day both on screen and in real life. Kreisberg says that a recurring theme on the show as many of the characters we see on Supergirl bend the rules now and then.

“Everyone is doing what they're doing out of a sense of love and to keep the people that they love safe, and that's why Mon-El did what he did, that's why Kara does what she did," said Kreisberg. "That's why Alex does what she does and to me that's the most interesting stuff because, I mean, I'd love to get into these episodes because it's the best kind of dramatic conflict where everybody is right and everybody is wrong and everyone is doing what they're doing because they care about each other."

Kreisberg then went on to say that the tension between Team DEO will eventually hit a breaking point soon or later.

Distributed worldwide by Warner Bros. International Television Distribution, SUPERGIRL is executive produced by Greg Berlanti (Arrow, The Flash), Ali Adler (The New Normal), Andrew Kreisberg (The Flash, Arrow) and Sarah Schechter (Blindspot, The Mysteries of Laura). Supergirl is based on the characters created by Jerry Siegel and Joe Shuster and appearing in DC Comics, by special arrangement with the Jerry Siegel Family.

Alex's Loyalties Will Be Addressed On the Next 'Supergirl'