Yesterday's WonderCon panel gave DC Comics fans quite a lot to take in -- including some major changes for Teen Titans.

The panel announced several new changes for the title, most notably in the team's distinctly different roster. The new team, which will launch in Teen Titans #20, will include Damian Wayne/Robin, Wally West/Kid Flash, and Emiko Queen/Red Arrow, as well as new characters Crush, Djinn, and Roundhouse.

While these three new recruits appear to be created solely for this new run of Teen Titans, Crush has some pretty particular parentage, as she is the daughter of Lobo. Jorge Jimenez recently provided character designs for the young Czarnian, which show that Crush will share her father's delightfully punk aesthetic. 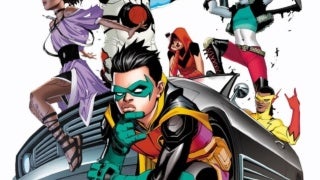 Djinn and Roundhouse are a bit more of a mystery, as they don't seem to have any clear connections to DC canon. While Roundhouse shares the moniker of a Penguin henchmen from 2010's "The Road Home" arc, this new character appears to be entirely new, with blue skin and a (currently-unknown) set of powers. And the name Djinn comes from Muslim mythology, which could indicate that this new heroine has some sort of supernatural powers.

The new run of Teen Titans will be written by Supernatural and Criminal Minds: Beyond Borders' Adam Glass, with art from Batman Beyond's Bernard Chang.

This announcement has certainly taken some fans by surprise, especially after earlier solicitations seemed to hint at the series meeting its end. Following the cancellation of series like Super Sons and Justice League of America, some had worried that both Titans and Teen Titans would be ending following their issues in April. But with the recent announcement that both series will have special one-shot issues, it's clear that both versions of the Titans aren't down for the count just yet.

Are you excited to see this new roster of Teen Titans come together? Sound off in the comments below.

Teen Titans #20 will be released this June.