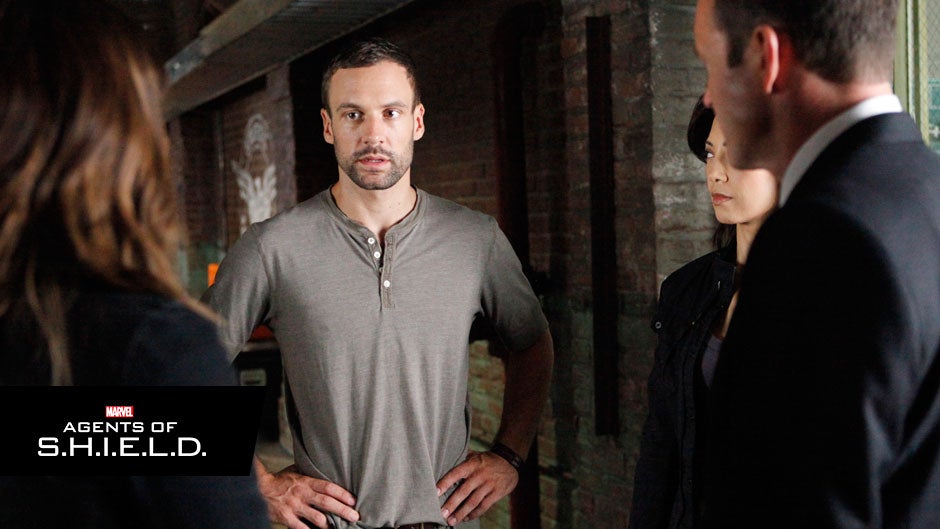 In Miami, a bishop arrives and is greeted by a priest who shows him into a burnt down church. He shows the bishop the only item that survived, a painting of the Virgin Mary. They declare its survival a miracle. The priest flips the painting and on the back side is writing like Coulson's mysterious scrawling.

In South Florida, Lance Hunter uses his charms to pick the pocket of a woman and hands off the item off to Skye, who drives by a motorcycle. She returns to base and uses the item to buy some tickets. Mack drops off Coulson and May, who are dressed up for a party. They use fake IDs to get in. The painting is in the basement of the party. May and Coulson turn off their communication devices and dance, while scoping the security and reminiscing about their youth. May mentions that she saw Coulson's hand trembling during the flight, and that his symptoms are getting worse. Coulson says they need to have a plan if Coulson goes the way of Garrett. They notice Glenn Talbot is at the party as well.

Coulson and approaches Talbot. He says that the success of his mission will benefit both S.H.I.E.L.D. and Talbot. Talbot says he won't interfere unless he feels he needs to.

The rest of the team jokes about Hunter's charms. He starts telling a story about his ex-wife, until Coulson calls back in. he tells them, because of Talbot, they're pushing their timetable way up.

May talks up the man who is running the benefit for the church. They flirt until May calls over Coulson, pretending to be her husband, to take a picture of them together. They hurry away as Talbot approaches. They head downstairs and knock out a guard, using the "camera" they took the picture with to create 3D models of the benefactor's eyes and get through a retinal scanner. They reach an area protected by a laser grid and Coulson gets ready to slip through, until May simply walks in, reminding him that security already knows they're there. They get to the room where the painting should be, but find that it's been appropriated by the government. Talbot phones Dr. Whitehall to let him know that he took the painting, and that Coulson is at the party.

May is frustrated and accuses Coulson of enjoying the situation because he was yearning for the old days. They move and run into Talbot. He asks them about the writing on the painting, saying it's why the government sent him. He proposes they work together, that he examines the writing at a secure government facility. Coulson agrees, but asks for an hour to give orders to his team. They agree on a meet. Coulson knows Talbot is trying to play them. May heads out to find out what's up.

Mack accuses Skye of digging into the information about the mission that Coulson and May didn't share. Hunter goes off on how evil his ex-wife is again. Skye compares it to Ward. The Simmons in Fitz' head encourages him to bond with the rest of the group, but he just walks away.

May looks into a room and sees Agent 33 with Hydra files on her and Coulson. She asks what she's done with Talbot, and he appears behind her and attacks. May grabs his face and pulls off a holographic mask, like the one Black Widow used In Captain America: The Winter Soldier, revealed Bakshi underneath. They knock her out. Realizing Coulson doesn't fully trust Talbot, they decide to disguise Agent 33 as May and send her in to infiltrate S.H.I.E.L.D.

Bakshi tells Agent 33 to get Coulson back to where they are. He gives her a device to help with Coulson's team. Agent 33 calls into Coulson, saying she thinks Talbot's offer is legit. She heads out to meet him, leaving the real May with Bakshi.

Fitz tells "Simmons" that he left because he wanted to be alone, not because he's afraid. He says he has trouble talking, but "Simmons" points out that he knows no trouble talking to her. She says he's just afraid he has nothing to say. He feels like he's not even part of the team, but "Simmons" says he could be if he'd stop hiding in the garage. He says it's supposed to be their lab, not a garage, and that they didn't even ask him for his opinion. He feels like even Ward is more valued than him. Agent 33 walks in, asking after Coulson. Fitz says he upstairs. Agent 33 quickly goes upstairs and pulls Coulson aside. She tells Coulson that Talbot wants to meet with him alone, but that she's going with him. She leaves the device Bashi gave him behind.

Bakshi questions May about why they're so interested in the painting. He wants to know who is running S.H.I.E.L.D. now and where they're running it out of. May isn't intimidated, but Bakshi warns that he serves someone who is very good at getting the information he wants. He plans on improvising until he can introduce them.

Coulson brings up their contingency plan, but Agent 33 doesn't know what he's talking about. He goes on about trusting May to take him out and take over as director, inadvertently revealing his own position of leadership.

"Simmons" again encourages Fitz to join the group. The lights on the Bus flicker as the plane begins to shut down. Mack examines it and realizes the Bus thinks they've made a water landing and has sealed them in. Fitz finds the device, points out it's based on S.H.I.E.L.D. tech, and says the plane will explode.

Fitz explains that there is a virus going through the Bus's electrical system, blowing things up. Soon it will hit the fuel and they'll all go up.

Bakshi tries to escape with the painting, and Coulson gives chase. May and Agent 33 fight. Fitz uses Hunter to try to stop the virus. Coulson stuns Bakshi as he's calling for extraction. Agent 33 reveals that she used to be S.H.I.E.L.D. to May. Fitz gets the Bus back online. May knocks out Agent 33. Coulson arrives and they escape.

Later, Hunter enters the lab and passes Mack and Fitz a beer. Fitz is hesitant, but Lance credits him with saving the whole team. "Simmons" encourages him one last time before disappearing. Fitz blurts out something about his history with Simmons and celebrates with Mack and Hunter.

Skye researches the painting, but hides it from Trip. Coulson calls Talbot to tell him about the situation. He encourages them to turn over everything they have from Hydra, but they tell him to painting was destroyed. With Talbot off the line, Coulson tells May that the painting is 500 years old, but the writing is new, meaning that someone else out there is carving the same way he is. He brings up "the plan" again. She shows him that she already has a plant that involves him going away, but not her shooting him in the head. He says that's sweet, but that she needs to forget it and kill him as ordered. They butt heads some more, but Coulson is firm on this.

Raina is on the phone, making plans to get to Miami as soon as possible. She's reading about the painting in a newspaper. Hydra agents trap her in her car, and Dr. Whitehall gets in and introduces himself. He want the Obelisk. She tries to talk her way out of it, but he slaps a device on her hand that silences and paralyzes her. He tells her about how he once operated on a woman, on and off, for a full week. He gives her 48 hours to get him the Obelisk and then leaves.