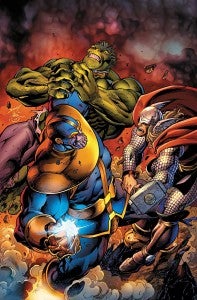 Marvel Comics' solicitation text, which went live this morning, included ten titles that will be coming to a close with their October issues, clearing the deck to make way for the new releases of the Marvel NOW! Initiative, which begins that month with Marvel NOW! #1 and Uncanny Avengers #1. Captain America, Avengers Assemble, Fantastic Four,FF, Incredible Hulk, Invincible Iron Man, New Mutants, The Mighty Thor,Uncanny X-Men and X-Men Legacy will conclude in October, with most of those titles being replaced by direct analogues and the rest generally seeing their creative teams leaving to take over relaunch titles. If Marvel NOW! has been in development for a while, this also might explain why Captain America and The Mighty Thor were restarted at #1 issues just over a year ago rather than continuing their original numberings, which were passed on to spinoff titles Captain America and... and Tales of Suspense. The fact that nine titles will be disappearing, including both Fantastic Four titles, will vanish in October is particularly notable because Marvel had told Entertainment Weekly that, rather than the all-at-once relaunch approach DC took with its New 52 last year, the Marvel NOW! initiative would see a gradual roll-out of its new titles over the course of five months ending in February. With no new #1 hitting for Fantastic Four in October, it seems likely we'll have one of those hitting in November's solicitations, at a minimum. The rest of these titles either feature characters who exist in more than one title or (in the case of New Mutants) who aren't always represented by a monthly title, but the absence of a Fantastic Four comic would be a notable absence in the publisher's lineup.