In a case of a writer who's really in tune with the characters of the Marvel Universe, Planet Hulk writer Greg Pak has hit social media to re-share a more than five-year-old tweet in which he accurately predicted the pop song that played in the background of today's Thor: Ragnarok teaser trailer.

It might be just an amusing coincidence, of course, except for the fact that Pak managed to nail Thor's "karaoke song" in a trailer based on a comic that Pak himself wrote, and is currently adapting into a prose novel in time for the movie's release.

There's also the fact that this isn't the first major project that Pak has willed into being on his Twitter page: in 2013, the writer crowdfunded a comic book miniseries based on the songs of his college buddy (and internet music sensation) Jonathan Coulton.

The comic, titled Code Monkey Save World, follows Code Monkey, a put-upon coding monkey from the eponymous Coulton song, as he teams up with the seething, lovelorn super-villain from Coulton's song "Skullcrusher Mountain." The unlikely duo fight robots, office worker zombies, and maybe even each other as they struggle to impress the amazing women for whom they fruitlessly long. Other characters include office-worker-turned-action-heroine Matilde (the "you" to whom the song "Code Monkey" is sung), Laura the Robo Queen (from the song "The Future Soon"), Zombie Bob (from "Re: Your Brains") and the heroic curler (from "Curl").

The project was kicked off when Pak jokingly tweeted that "You could field a pretty awesome supervillain team with characters from Jonathan Coulton songs," to which Coulton tweeted back "DO IT."

And Pak was right: 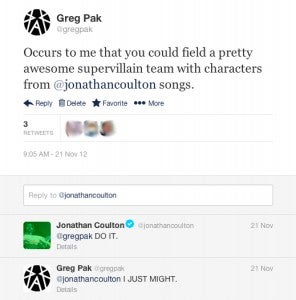 "There's a song called 'The Future Soon,' where a young nerdy kid who's in love with this girl Laura fantasizes about a future where he will win her love by creating robot army and taking over the world," Coulton said at the time. "As Greg pointed out, that seems like it's a prequel to 'Skullcrusher Mountain.' So that character – the boy in that song – could potentially grow up to be villainous genius in 'Skullcrusher Mountain.' What would happen to Laura under those circumstances? What would their relationship be like? That ties in very beautifully with "Chiron Beta Prime," which is all about these robots, this robo-slave colony where robots have enslaved humans."

"This thing has monkeys, robots and zombies. It hit the trifecta," said artist Tak Miyazawa. "How could I say no?"

In another tweet today, Pak said that "Immigrant Song" has been his own personal go-to at karaoke for about a year -- we're hoping that he'll read this article and deign to share video with us -- adding another personal dimension to the "prediction."

We'll have to wait a while to see whether Pak had somehow inserted "Immigrant Song" into the content of his prose novel, but given his track record so far...it's not such a crazy idea!

(He also utilized immigrant metaphors, of course, during his run on Action Comics, although he's hardly the first to draw that parallel.)