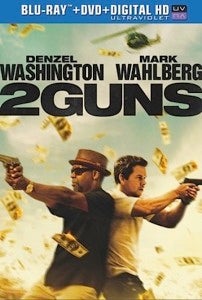 Universal Studios Home Entertainment today announced the release date and special features for the upcoming Blu-ray and DVD of 2 Guns, the Denzel Washington/Mark Wahlberg vehicle based on Steven Grant's BOOM! Studios comic book. In the film, the pair play two operatives from competing government organizations who must team up for their mutual benefit and survival. 2 Guns will be available on Digital HD starting November 5, 2013, two weeks before it's available on store shelves. Fans can own the movie on Blu-ray and DVD as well as rent it On Demand starting November 19, 2013. When an attempt to take down a drug cartel blows up in their faces, two undercover operatives are forced to go on the run together, though neither knows that the other is a federal agent. Suddenly, everyone on both sides of the law wants them dead, and their only hope is to trust each other. The film also stars Paula Patton, Fred Ward, James Marsden, Bill Paxton, Andrew Cosby, and Edward James Olmos. Blu-ray combo pack-exclusive bonus features include:

Features available on both Blu-ray and DVD include: