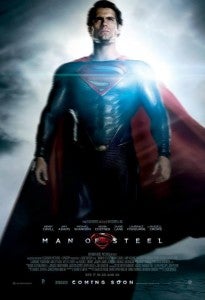 With the first new Superman film in nearly a decade just a few weeks away from hitting U.S. theaters, the hype machine has kicked into overdrive, with Avengers levels of trailers, TV spots, posters and buzz. Will it live up to its potential? We won't know that until June when the screenings start. But one thing we do know? We're pretty pumped to see the film. Why? 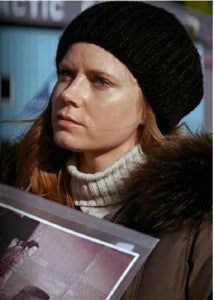 Yes, folks, Lois Lane looks like she's been done right. And that's huge. The world simply won't respond to a damsel in distress the same way anymore, and the post-feminist, post-Crisis version of Lois--the army brat who could probably take you in a fight--was arguably the best way to go. That's what we seem to be getting here, complete with a "blaster gun," according to earlier interviews, and a clear sense that she's an important part of the action. There's more action in the most recent Man of Steel trailer than in all five previous Superman movies combined. This one is almost glib--but it's true. The first five Superman feature films were pretty limited--first by the special effects available at the time and then later by a fidelity to the older material. Man of Steel has no such problem. The serene Superman of the Reeve films might bear a resemblance to what Grant Morrison and Frank Quitely did in All-Star Superman, but it's hard to imagine him connecting with a post-Avengers audience, and this new Superman seems more proactive. 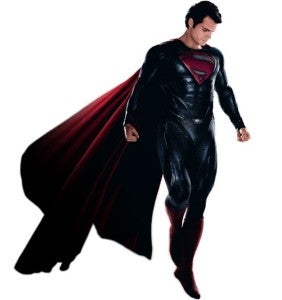 Henry Cavill looks the part. It's extremely difficult to find someone who looks both wholesome enough and formidable enough to be Superman, but Snyder seems to have nailed it. That might be half the battle right there, as it was for the filmmakers who made Iron Man. They're embracing the sci-fi. Krypton is a living, visceral place in the flahsbacks rather than a glorified soundstage like in the previous films Granted, Krypton is destroyed before our story really begins--which is why in the past very little time or energy has been spent on it. In the Donner films and after, though, it felt a bit unreal. The way Krypton seems to have been handled here is a bit more in line with the comics and/or Smallville. Part and parcel of why Krypton looks so good is the fact that, while they have been giving a lot of lip service to creating a "real world" Superman, Snyder and company have also embraced the science fiction elements of the character, playing up a universe in which Superman could live, rather than a Superman who could live in our universe. 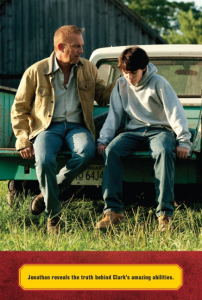 Clark's relationship with both of his father figures seems perfect. Both Jor-El and Jonathan Kent have been the focus of much of the promotion for the movie, leaving Superman himself a bit of an enigma. That's a cool strategy for building up anticipation around Cavill's supposedly iconic portrayal, but it also gives us something to look forward to: the fact that both of the fathers seem to have nailed the performances, and David S. Goyer seems to really understand what makes each of them unique and what makes them tick. Michael Shannon's Zod is a creepy, ominous presence and a physical threat While it was the writing that made Zod a threat in Superman II--Terrence Stamp was terrific but not really a physical threat--it's a combination of both that seems to make Michael Shannon an effective villain. Imposing, dangerous AND deranged, Zod is more than your average punch-'em-up movie villain, taking a lesson from the fact that you can't have a truly great superhero movie unless the villain's performance is great too. 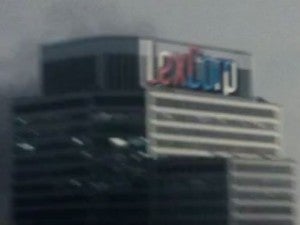 The birth of the DC Universe The existence of LexCorp, Blaze Comics and whatever other DC landmarks and familiar names pop up along the way hints at something bigger than just Superman himself--and that's great. Superman as an inspiration Because they're building a DC Universe, one of Superman's primary roles--neglected onscreen so far but handled pretty well in Smallville--will be able to be broached in the future: he's an inspiration to those around him. Remember that whole thing in Spider-Man where the civilians took up arms against Goblin because that's what Spidey "taught" them they ought to do? Superman's role in the DC Universe is like that, only bigger. They're doing Clark Kent right There's been a lot of grumbling that Clark Kent isn't going to be bumbling his way through the movie while wearing horn-rimmed glasses. That's understandable in terms of fidelity to the old stories, but realistically the way they're doing it--by developing Clark as a person rather than as "Superman's disguise," is going to ultimately be more satisfying and, among other things, give fans a sense of why the heck someone as smart and sexy as Lois Lane would fall for a guy like him. Zack Snyder can do epic. Look, you can argue all kinds of things about Snyder's style, and he may not have been our first choice for Superman, either...but few filmmakers do more consistently widescreen, epic adventure stories than he does, and the action always looks good (if stylized). Complaining about his slow-mo is like complaining about lens flares in an Abrams movie; it obscures any serious examination of the larger work.

The use of powers looks great so far. Let's face it--up until now, powers had been used in fairly safe and conservative ways--except when they were utterly absurd, like turning back time for some reason or rebuilding the Great Wall of China with his eyes. This seems to be using them a little bit more in line with what you'd expect in the comics--in a way that serves character and action, rather than treating the powers as an end unto themselves ("you will believe a man can fly!"). The Kryptonians LOOK powerful There's something different about Superman and his foes in this movie. Maybe it's the fact that Snyder is playing up the "alien" nature of their existence, but whatever it is, they seem a lot more powerful and formidable in this movie, giving the whole thing a sense of scope and stakes. They're basically doing Smallville in the film's first act. It took Warner Bros. Television ten years to get Clark into that suit, while exploring his humanity and motivations along the way--and there's nothing wrong with it, since that was the show's mission statement...but the fact that we're getting all of Smallville in the first half of the movie, without apparently skimping on character development, is really promising. "Whoever that man is, he's going to change the world." There are decisions that Clark has to make throughout this movie that will challenge his values, his sense of identity and his willingness to do what's right no matter the cost. That's always been Superman's most important power, so seeing it actually get a workout will be nice. 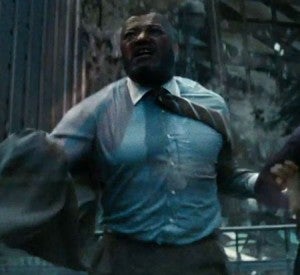 The entire principal cast is full of great actors. While there are a few unfamiliar faces, there's not a Megan Fox in the whole bunch. I mean, Richard freaking Schiff? Come on! He could be a whole reason in and of himself, if not for the fact that most comic book people don't love The West Wing as much as me. Chris Meloni's one of those guys with more range than almost any actor working, and Laurence Fishburne is an inspired choice for Perry White, whatever color his skin is. The Lois/Superman relationship looks more believable than ever before. Like what we said above about learning what it is about Clark that makes him appealing to Lois, it seems as though this film will give us a strong sense of what makes Lois appealing to Superman beyond just "She's really pretty." The love-at-first-sight angle seems frankly a little shallow for the Man of Tomorrow, but the fact that he could fall for a brilliant investigative reporter and arguably the only person outside of his parents who truly understand him? There's some story in that. Superman's sense of destiny. While there are choices that he has to make to lead him where he'll eventually go, there's a sense of destiny in this movie--that Superman has something to embrace. And as easy as it is to pick on the Christ metaphors in Superman's story, it's equally a big part of what has traditionally made his story so compelling to such a wide audience. Lois is a damn good reporter. We touched on this above, but in today's world there are very few of this type of character so it's worth mentioning in its own right. Lois seems to be not only following someone who doesn't want to be followed, but doing so in today's media environment where there's basically no support or funding for investigative work. That means she's really fighting against the tide in a big way. The fact that she ever ends up in a room with Superman is a testament to her. They're seeding familiar names everywhere (Emil Hamilton, Ken Braverman, etc.) Not just the "DC Universe" in terms of other prospective superheroes, but they're seeding the film with names familiar to longtime Superman readers. We get to see Emil Hamilton, Dev-Em and Kenny Braverman in a $200 million movie? How the heck did that happen?! Superman hits a girl. This Superman isn't precious. He has a job to do. He's here to do it, and the filmmakers aren't scared to make him somebody who isn't all apple pie and puppies. Additionally, none of the women in this movie are helpless; Faora is as much of a threat as anyone under Zod's command. Both of these realities are exciting. As silly as it is, they seem to care about his sex life and how he shaves. It's all a part of making him a more rounded, complete character and of giving the world he inhabits some depth. So...yeah, we care about these little trivial things. Why shouldn't the filmmakers? The Prequel The Man of Steel Prequel was a great comic by a great creative team, and gives the fans and filmmakers a lot to think about, chew over and work with in the future. 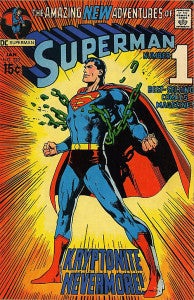 No Kryptonite! One of the things that has helped Superman a ton over the years were the periods when editorial put restrictions on how much and how often Kryptonite could be a factor in the storytelling. It's an "easy" story to tell, and for that reason not a compelling one if it's used often. And it's been used pretty often, so far, on the big screen. Speaking of which... No (?) Luthor! At least as far as we can tell, this movie isn't about Lex Luthor pulling the strings. He's a great character, but having him in every single Superman movie as a key/the main antagonist has become tiresome. No other superhero franchise has done that, and for good reason. It's a ground-up reinvention, not beholden to the Donner films. Look, I love the Richard Donner movies as much as the next guy, provided the next guy isn't Geoff Johns. But the film doesn't need somebody trying to ape Richard Donner any more than Batman needs somebody trying to ape Tim Burton. The fact that this film's approach, look and everything throughout seems to be its own is hugely promising.