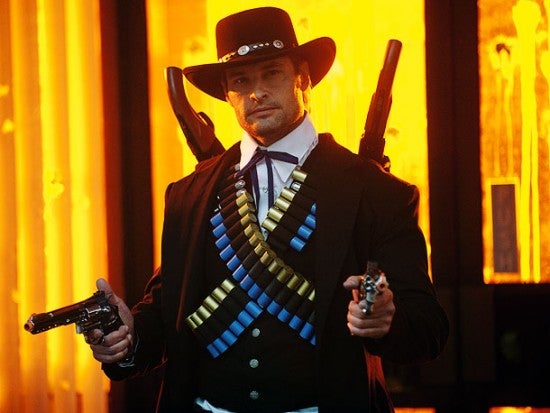 Josh Holloway, of Lost fame, is hot off an impressive debut for his new series Intelligence, which beat out Marvel's Agents of S.H.I.E.L.D. as the top-rated series premiere of the year, is reportedly one of the names being considered for an as-yet-undisclosed role in Batman vs. Superman. That's according to Comic Book Movie, who have nothing but a name and some speculation that it would make fans happy if he were to be cast as Aquaman/Arthur Curry. Unless the plan is to introduce every member of the Justice League in this one film, though, it seems hard to believe that's a direction they would go, since there's already mumbling by fans and the press about the movie being too crowded and busy for its own good. Holloway, who is apparently being "strongly" considered for a role, is best known for Lost but has also done Mission: Impossible - Ghost Protocol, both with Star Wars Episode VII director J. J. Abrams producing. Abrams was briefly considered for a Superman movie ten or so years ago, and he wouldn't be Holloway's only (tenuous) connection to the superhero film world. Holloway played the villain, "The Black Rider," in the Community episode "A Fistful of Paintballs," directed by Captain America: The Winter Soldier's Joe Russo. Marvel's Agents of S.H.I.E.L.D. honcho Jeph Loeb also had an executive role on Lost. As with any of the many Batman vs. Superman rumors, take this with a grain of salt...but as the film draws closer to its planned February start date, there will likely be some more leaks and more official announcements both. Batman vs. Superman will hit theaters on July 17, 2015.