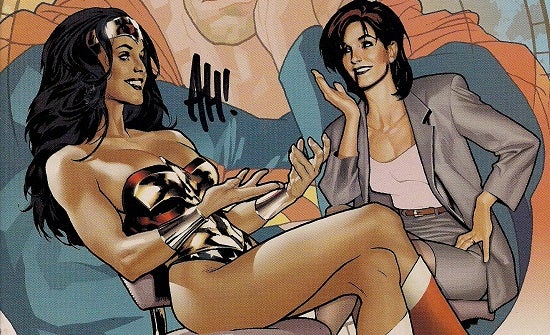 As we reported over the weekend

, Batman-On-Film's Bill "Jett" Ramey, who has a solid track record managing Batman movie rumors and debunking falsehoods, took a few swings at some of the burning questions that fans have about the upcoming Man of Steel sequel, tentatively titled Batman vs. Superman. That post, and our coverage, both hit on Saturday. By today, the echo chamber of repeating and distorting an account has turned into a full-blown fan freakout. At its heart, the controversy du jour is about how it's generally accepted that Hollywood doesn't know what to do with female superheroes--and that Warner Bros. don't know what to do with Wonder Woman. In his post--which ranged from "insider information" to "rumor" to pure speculation and covered a lot of ground, Ramey touched down on the origins of the Amazons as he saw them in the DC Cinematic Universe. He speculated--with nothing to back it up except his own guesswork, from what we can tell--that the Amazon race may be descended from ancient Kryptonians who came to Earth in the distant past, leaving behind the landing craft that served as Superman's Fortress of Solitude in Man of Steel. 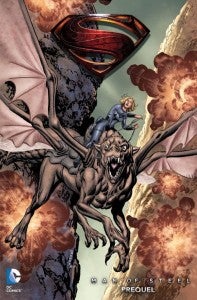 "Personally, I'd say it'll be about on par with Scarlett Johansson's first appearance as Black Widow in Iron Man 2. I believe that it's a cameo-plus type of role that will (hopefully) serve as a springboard to a solo Wonder Woman movie," Ramey said. "With all that said, I'd bet a year's pay – in MONOPOLY money, of course – that the 'Amazons' of this cinematic DCU will be descendants of those 'ancient Kryptonians' who attempted to set up Kryptonian outposts throughout spacedom thousands and thousands of years ago. Furthermore, I say that Wonder Woman will be powered-down, if you will, relative to Superman because these Amazons have evolved and adapted to living on Earth for hundreds of centuries. And since Kryptonians are produced without any 'He'n and She'n' – Jor El and Lara excluded – couldn't this original Kryptonian on Earth have used this reproductive science to create an all-female race? I say yes!" Aside from being a bit strange, and having the predictable impact of drawing the ire of...well, everybody...it's not epecially bad, as theories go, if only because there's an existing basis for those ancient Kryptonians. Not just the ship itself, but its pilot. Kara Zor-El (Superman's cousin Supergirl in the comics) was the one who crash-landed the outpost that later became the Fortress of Solitude in Man of Steel. This took place during the Wal-Mart exclusive Man of Steel Prequel digital comic, and it's not clear in the end whether she or the villain who caused her craft to crash survived to fight another day--but at least one of them did. If we had to guess, this is where the idea came from that Kryptonians could have spawned the Amazon race--because it gives us one or more ancient Kryptonians (and probably a female, let's face it) wandering the earth. That said, it never occurred to anyone six months ago when this comic was released that Kara's presence would lead to Amazons or any other super-characters beyond, perhaps, Supergirl herself or some variation on Chris Kent. In any event, the level of the freak-out going on right now is pretty absurd when you consider that, while some elements of Ramey's story were taken from insider reports or grapevine rumors he's heard, he makes no bones about this Wonder Woman stuff being all entirely speculative (you can tell by the way it all starts with "Personally"). While he may be a generally trustworthy source for news and information, there's nothing particularly special about his brain that makes his guesswork inherently any more credible or newsworthy than anyone else's--which is why we elected not to make the Wonder Woman thing headline news on Saturday when we covered the rest of the claims. You can see the prequel comic, filmed as a motion comic, embedded below.