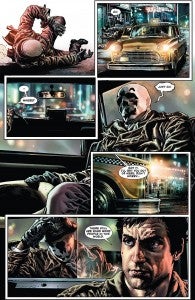 In the preview pages for today's release of Before Watchmen: Rorschach #3, you'll notice a very odd guest star: Travis Bickle, the character played by Robert DeNiro in the classic Martin Scorcese film Taxi Driver. "There are still some good people in this world," Bickle says while picking up Rorschach, suggesting that he approves of the vigilante's chosen avocation. This "team-up," so to speak, of two of the greatest well-meaning, deranged, right-wing, anti-authority archetypes in popular culture brings two characters face to face for the first time who have been compared and spoken about in the same sentence for decades. It isn't the first time Watchmen and Taxi Driver have (sort of) crossed over, either; the film version of Watchmen reportedly lifted their version of the city straight out of Scorcese's film. "We took frames from Taxi Driver, then painted them with the Watchmen colors so the end result is both period-correct, pop-culturally referential and graphic-novel layered," director Zack Snyder told Wired at the time. "One of the bars on the street came directly from Taxi Driver." More than just the look, that's the tone they hoped to achieve with the film overall. "The idea of Watchmen is not to do a CGI movie, but to do it when it's necessary," Snyder told First Showing back when he was putting the film adaptation of the graphic novel together. "Like when Doc Manhattan goes to Mars, there's an issue here, we've got to figure that out. We can't go to Mars, I know, a lot people are going to be disappointed by that - but I just don't have the money. Antarctica also, there's no Carnac built there. I know, again, we should probably build it and then go film it there, but I don't think they're going let us do that. So those two things right off the bat you can think about. Dr. Manhattan himself, what do you do, how do you make him - how do you render him. Rorschach's mask. There's things that have to be dealt with and figured out. But I think that the appetite for me is to make a movie that feel's more like Taxi Driver than like Fantastic Four, again. So it's a balance."

Before Watchmen: Rorschach Rides With the Taxi Driver