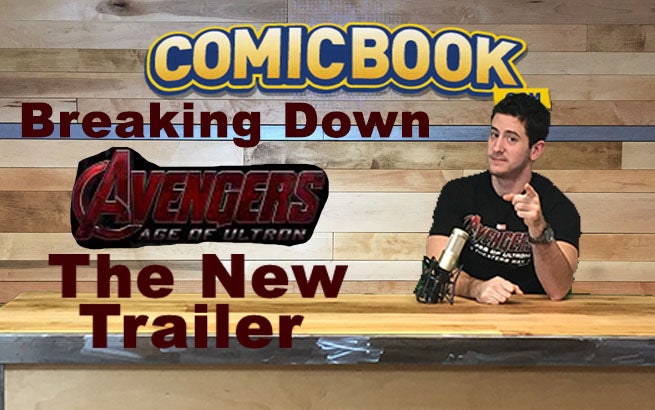 Just like millions of other people, I'm very excited today. Last night we got a look at the newest trailer for Avengers: Age of Ultron, and naturally I told my cat to shut up and turned up my TV's volume, only to watch 20 more times on YouTube afterwards. It really blew me away with some of the action and finally some insight to what's going on. If you haven't seen the trailer, you have to, and we have at ComicBook.com. The video below features a detailed analysis of the trailer, as well as some theories on mysteries it presented.

First of all, let's talk about Captain America fighting one of Ultron's drones. That drone is NOT Ultron himself, and it looks like he is just tossing Cap around. This just shows us how high of a mountain the Avengers have to climb to have a chance at defeating this army of drones, let alone the big bad Ultron.

Then I noticed that the Avengers are fighting each other. A lot. We saw this in the first film, but that was just them getting to know each other. This time, we see Thor choking Stark, but then we see an awesome great look Hulkbuster versus Hulk. Look at Hulk's eyes, though. They're red. Now, I'm assuming he's not hungover from partying like it's literally the end of the world, I think he's under the control of Scarlet Witch. Last time we saw Hawkeye turned against his friends, but I mean, it seems clear that Hulk is a much bigger force to reckon with as a foe.

How about Ultron's powers? We know he's this self-aware artificial being bent on taking out humanity, but we got a look at more of what he's capable of. Since his drones can fly, I assume he can, but then what about the laser beam thing coming out of his hand? What is that?

Then there's the mystery women Marvel has been throwing at us. In the first trailer we saw the woman standing with Thor during the party scene, but this time we got two more. There is ANOTHER woman standing behind Thor while he's getting electrocuted, who I think might be either Moondragon or Hela. But then there's another one that's got the internet going crazy. Who is the woman in the cave? It looks like Wakanda, but who knows if it really is. We think it's either Shuri, the Black Panther's sister, or Dora Milaje, his personal body guards.

Before changing the topic from Wakanda, I want to take a look at Andy Serkis' character. He looks obviously like Ulyesses Klaw, an arms dealer and foe of Black Panther. What's most important about these visits to Wakanda though, is that its rich in Vibranium, a very durable metal similar to Adamantium. Is it possible that the hot metal dripping from Ultron's hand in the previous trailer is Vibranium? Maybe.

What moments were your favorite? Who do you think those women are? Leave some comments below because I'd love to hear from you, or join me in the Spoiler Room, our new message board. We'll be covering the trailer and all things Avengers: Age of Ultron at ComicBook.com, so make sure you stick around to stay up to date.

Breaking Down The Avengers: Age of Ultron Trailer (Video)