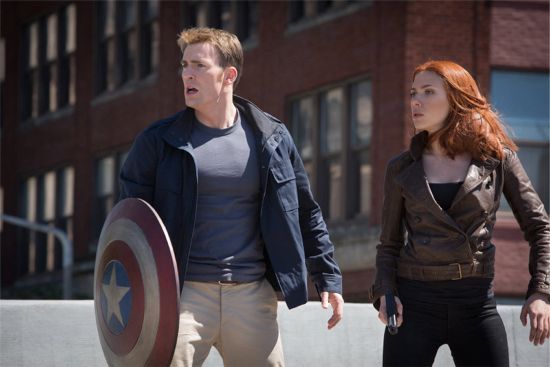 Scene 1: After the fall of both S.H.I.E.L.D. and HYDRA we see Baron Von Strucker (Thomas Kretschmann) in his underground lair. Loki's scepter can be found here, as well as two special prisoners: the "twins". These are of course Quicksilver (Aaron Taylor-Johnson) and Scarlet Witch (Elizabeth Olsen). Quicksilver is bouncing from one end in his cell to another while Scarlet Witch is stacking some building blocks with her mind. Watching them, Von Strucker announces "The Age of Miracles" is upon us. And with that we learn the new name for mutants in the Marvel movieverse. Scene 2: The Winter Soldier is visiting the Captain America exhibit in the Smithsonian museum. Here he finds the information on James Buchanan "Bucky" Barnes, his real name. It appears the Winter Soldier now knows who he really was and remembers that Captain America spoke the truth about him.