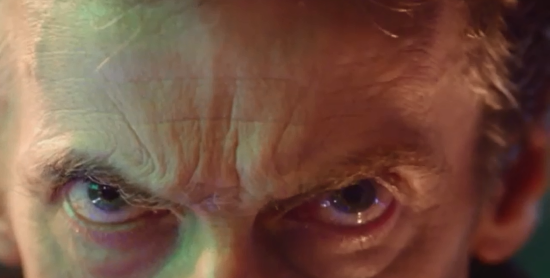 Last week, when new Doctor Who star Peter Capaldi was spotted out in public filming for the show while wearing pajamas, a number of fan sites took to the Internet with amateur photos wondering aloud whether the always-eccentric Doctor's most current incarnation might turn out to be wearing pajamas as his "default" look. Reaction on the part of the fan base was mixed, but most people didn't get too invested, as it seemed pretty unlikely to start with. Now, perhaps in part to put an end to the pajama rumors, showrunner Steven Moffat is assuring fans that they will see the look soon...and implying that they haven't yet. "In the next few days I would think," Moffat told Film Review Online. "It's just the first time we hit daylight with it, and then it will be out." It may take a little reading between the lines, but that certainly seems to say that what's already hit daylight isn't the droids you're looking for. Asked how the decision is arrived at for the look of the character, Moffat said that his involvement personally was somewhat limited. "It's done with the actor and the costume designer really, and me in the background. It's whatever makes Peter feel good as the Doctor."

Doctor Who's New Costume Coming Soon--And It's Likely Not Pajamas