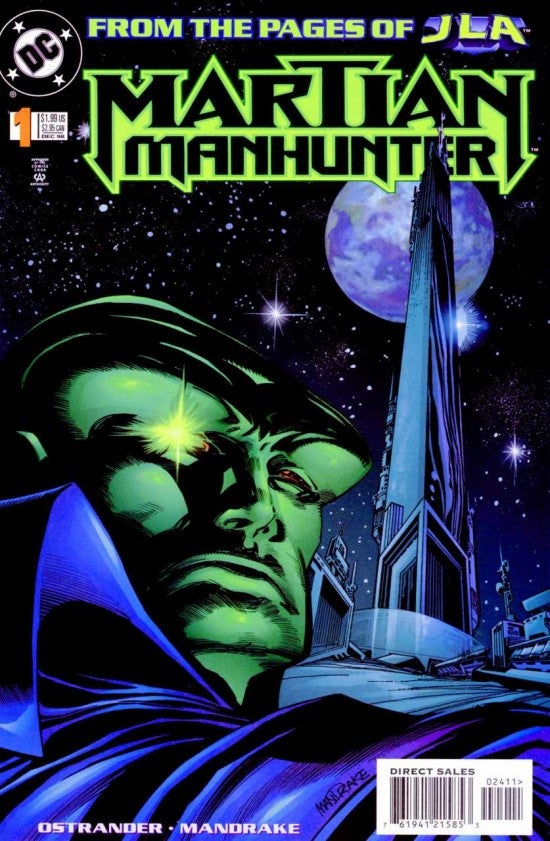 While Man of Steel writer David S. Goyer's ill-advised rant on a podcast last week mainly drew ire for his comments about She-Hulk, it didn't endear him much to fans of the Martian Manhunter, either. The most recent ongoing series for Martian Manhunter was written by John Ostrander and Tom Mandrake and, perhaps unsurprisingly, Ostrander (who has a column over at ComicMix) had some things to say about it. For context, here's Goyer's comments on J'Onn J'Onzz:

"How many people in the audience have heard of Martian Manhunter?" Following some applause from the audience, Goyer joked, "How many people that raised their hands have ever been laid?" "Well, he can't be f****** called 'The Martian Manhunter' because that's goofy. He could be called "Manhunter." … The whole deal with Martian Manhunter is he's an alien living amongst us, that's the deal. He came out in the '50s, and he had basically all the powers of Superman, except he didn't like fire, and he could read your mind. So here's the best part: So he comes down to Earth and decides, unlike Superman who already exists in the world now, that he's just going to be a homicide detective, and pretend to be a human homicide guy. … So instead of using superpowers and mind-reading and like, 'Oh, I could figure out if the President's lying or whatever,' he just decides to disguise himself as a human homicide detective. Dare to dream. "I would set it up like The Day After Tomorrow. We discover one of those Earth-like planets… So maybe like… we get the DNA code from that planet and then grow him in a petri dish here… He's like in Area 51 or something and we're just basically… doing biopsies on him."

And here's a bit of Ostrander's reaction, which you can read in full at the ComicMix link above.

"Goyer and I are in small agreement: I also felt that in many ways the Martian Manhunter was a green clone of Superman," wrote Ostrander. "He had most of the same powers and, instead of Kryptonite, his weakness was fire. When Tom and I did our series, we wanted to focus on what made him and Superman different. The principal one was that, while born an alien, Kal-El came to earth as an infant and was raised as a human. His values are Midwestern values. J'Onn came to earth as an adult; he was raised in a Martian culture. He's not American; he is fundamentally alien – a Martian.